The Weapons of Marriage

I met my husband while we were both at university, many moons ago...
Obviously he wasn't my husband then.
In fact, while we were there, we didn't know each other that well at all.
We were on the same course, but we didn't talk much there as all the lectures were in the mornings and he doesn't really know how to make words before noon (I didn't know that then - I assumed he just didn't want to associate with me in front of Other People) and we had some mutual friends and acquaintances, so used to see each other at parties and the like from time to time.

When we finally moved on to Real Life (or, in his case, more university), we kept in touch in a vagueish kind of way, exchanging odd emails and things. I'm not really sure why, to be honest - obviously just one of Those Things.

Anyway, about half way through his PhD, husband-but-not-husband-then went to Japan for a PhD related whatnot, during a period when we were enjoying much entertaining email contact.
He asked me whether I wanted anything brought back and I (obviously) said "yes, a sword"...

Being the sensible young man he was, he did not, in fact, fulfil this request, but did bring this super sharp knife, which he (I think) posted to me when he got back, with the warning that both he and his flatmate had managed to cut themselves on his matching knife with in about 30 seconds of getting it home...

Nice, eh?
I didn't cut myself, but I did (and do) love the knife in spite of this (though it was, indeed, very sharp) and used it lots.

Anyway, one thing led to another, the rest is history and various other such cliches and we ended up, a few years later, married and living together in the sunny East of London.

For our first wedding anniversary, he gave me this. 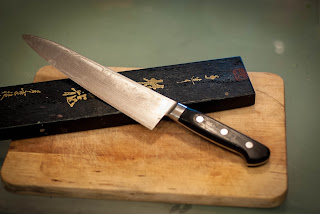 It's from the nice people at Kin Knives and was the actual best thing I had ever owned (he's pretty good with presents).

It is super sharp and incredibly beautiful as well as being functional and has truly taught me the value of fingernails.
I use it every day and was utterly bereft in the summer when I sent it away for a few days to be sharpened.

Fast forwarding to December this year saw another (Jennie-free) trip to Japan and this amazing Christmas present.

Once again, super super sharp, and possibly the best one yet.
AND it has my NAME on it. In Japanese, obviously. 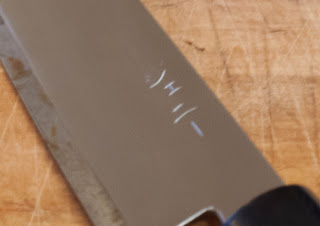 It's from Aritsugu in Kyoto, who are an awesome and very old (18th generation now) knife maker from Kyoto and, needless to say, I love it a lot and have been frantically chopping, dicing and slicing things since Christmas.

I'm not sure whether this story has a moral.
Maybe it's that knives are cool, maybe it's that I'm easily bought with sharp, shiny things or maybe it's simply that I have an awesome husband* - who knows...?

In any case, thank you for admiring my blades so nicely and with such appropriate ooohs and aaahs etc - as always, it has been delightful sharing with you.