Today my delicious husband had an interview in the morning, so, to ease the pain, we went for a glamorous post-interview lunch at Viajante.

I was pretty excited about it, having heard so very very many good things from a great number of people.
To be honest, given that it's really only just down the road from us, it's a bit hard to see why it's taken us so long to get ourselves there!

For anyone who has been living in an opaque box or similar, Viajante - the restaurant of Nuno Mendes (of Bacchus and The Loft fame), gastronomer extraordinaire - is housed in the old Bethnal Green town hall (alongside a hotel and, I think, apartments) and was awarded its first Michelin star about three days after I made our booking.

It still looks very much as it presumably always has on the outside and the design on the inside is pretty glamorous, but, at the same time, still pleasingly town-hallicious.

As we arrived pretty much on time, we didn't have time to investigate the bar (though do plan to return some time soon for cocktails), but did have a quick look at the chandelier affair that dominates the room, which is undoubtedly splendid.

The restaurant is smaller than I was expecting, with a nice laid back atmosphere (which we loved).
The beautiful open kitchen is a fantastic idea, though we were really too far away to get a good view - I'm definitely going to ask for a closer table next time - and there are lots of nice art/design features besides.

And there were artichoke based table decorations :-) 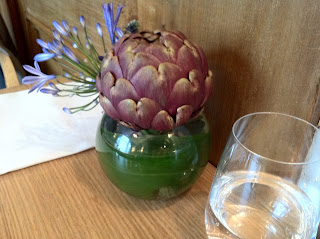 We opted for the 6 course tasting menu with matching wines.
This menu is totally blind (we were asked about allergies etc on booking and also on arrival), which we thought was pretty exciting.

Amuse bouche - Thai Explosion II - like a tiny egg sandwich with a bit of chicken and lovely fresh Thai flavours - husband doesn't like egg much (I know - weird...) and even he loved it. 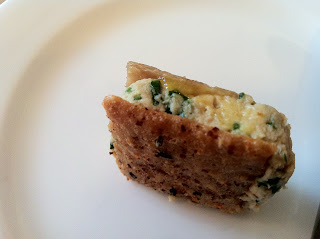 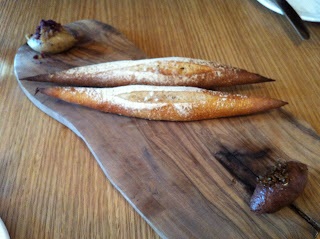 Actual first course of 6 - squid with squid ink, sea lettuce (which seemed to consist of greeny seaweed and samphire) and pickled radishes. This was accompanied by a 2009 Navazos Niepoort, which we were familiar with already, being big fans of Equipo Navazos, unusually for non-sherry-wine, made with palomino grapes. I loved this dish, and the wine was a near perfect match, with both food and wine tasting of the sea.
As you can see - I was a bit overenthusiastic, and ate much of this before remembering to photograph it - I almost did this again repeatedly, but husband did a valiant job of keeping me in line. 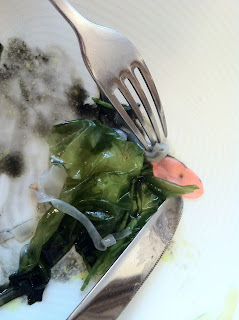 Salsify (one of my favourite things) poached in milk with lovely brown butter, some unidenified scrunchy things, beef gel and some yummy blobs of prawny goodness. Paired with a gorgeous Mosel riesling. Again, a fabulous match and a lovely dish. Husband was a bit worried about the jelly (possibly because I've been force feeding him pork pie for a few days), but was won over by the end. 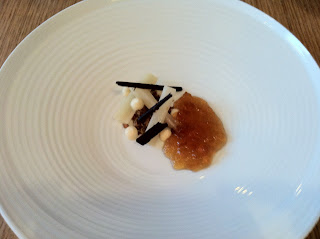 Duck hearts and tongues (which turn out to be really tasty - and quite big - what do ducks do with such big tongues?) with roasted celeriac, pine and hazelnuts and watercress. Served with a crazy (presumably super) Tuscan white sangiovese (I had no idea such things existed - I'll definitely look out in future though). I wasn't certain I'd like the wine as it had a definite whack of American oak (which I often find a bit OTT) but it was actually really well balanced (and utterly delicious). This was the only one, though, that we thought was a slightly less than perfect food match - not bad, by any means, but just not quite as great as some of the others.
I'm wary of celeriac generally, so wasn't holding out great hopes for this course, but, in fact, whatever they did to it rendered it delicious, the ducks tongues were nice and the heart was incredibly tender - I'd love to know what they did to it - sous-vide possibly? It's competitive, but this might have been my pick of the courses. 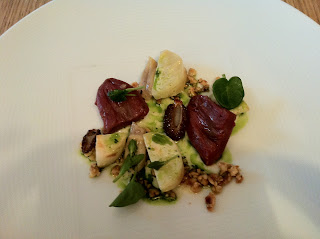 Course 4 - the first of the 'main' courses (in my reading of the menu, anyway) - lobster and potato with confit egg yolk and saffron. And lobstricious foam. And tantalising bits of dill. Yum. Husband's (probable) dish of the day.
Served with a big Aussie chardonnay - delicious and, of course, a great match. 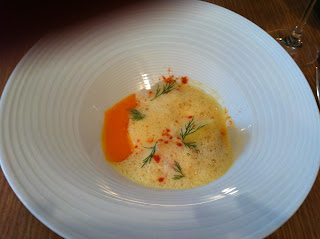 Last of the savoury courses - lamb loin and belly with wild garlicky cereal stuff and a lamb jus. Husband would like to state here that the belly was probably the lambiest thing he has ever eaten. Matched with the only red wine of the day, a Chinon from 2007.
In some ways, the most pedestrian dish of the meal, in that it wasn't a million miles away from something you might do yourself (or, at least, eat elsewhere). However, it was beautifully executed and all the flavours were balanced and delicious. The wine was, again, a very good match - light enough for the herbs, but with enough body and tannin to stand up to the lamb. 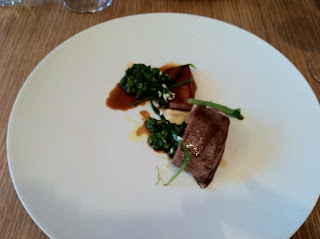 An extra course palate cleanser now - frozen maple pannacotta with shiso granita and apple bits (and meringuey scrunchies). This absolutely did cleanse our palates, but was really so tasty that it deserved to be named as a course in its own right. The apple bits somehow seemed to lift and gel the whole thing together. 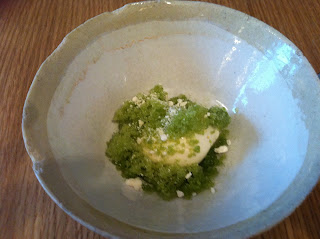 The dessert was just called 'parsnips and milk' - in fact, some bits of roasted parsnip, a parsnip puree, a reduced milk sorbet and some beer tapioca all sprinkled with a black olive and coffee dust. Accompanied by a vin de glace from Italy (this wine was labelled vin de glace, but I didn't think they made actual ice wine in Italy? The waiter described it as 'late harvested grapes').
I was most doubtful about this course as I really don't like parsnips much and I find dessert wines a bit of a minefield. However, I actually quite enjoyed it (and husband really liked). I found the parsnip puree a bit extreme at first, but the actual parsnip bits were nice, the beer tapioca was lovely and the milk sorbet with the black dust was one of the best things I've tasted in ages. I also enjoyed the wine - it was less cloying than I'd expect from an ice wine, and a lovely match for the slightly mad pudding. 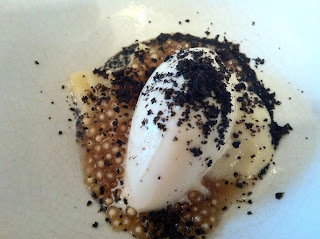 And finally petit fours (though neither of us had coffee). A citrus creme catalane, lovely and orange zesty, cep and white chocolate truffles (oh my goodness, these were good) on a crushed gingernutty thing and, I think, yuzu pastilles.
Absolutely gorgeous. What a way to end your lunch! 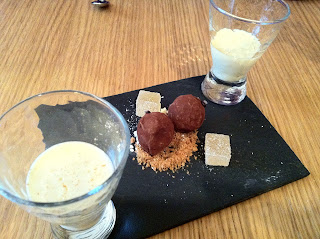 They gave us copies of the menu on the way out, which was a really nice touch (and helped a lot with this blog).

Overall - we had a fantastic time at Viajante and would absolutely recommend it to anyone with some time (it took a couple of hours, though we barely noticed at the time).
We really loved the food and both properly enjoyed the blind tasting menu conceit - it's really nice to have someone else choose things for you - you get to try things which you just wouldn't normally choose. It was very clear that the menu was built around super seasonal ingredients - this appeals to me a lot.
We were pleased that we'd opted for the matching wines, too, and thought that they were not only delicious, but also very well chosen as pairings. In fact, on a personal level, it was almost like the wines were actually chosen with me in mind, as so many of my very favourite things were included.
The service and general atmosphere was very much to our taste - it was attentive and informative, while still being casual and comfortable. The incessant refilling of the water glasses (with free sparkling water - v good) was possibly a little bit over the top, but that's an extremely minor quibble.
Also deserving of a mention was the, very entertaining, fact that when you went downstairs to the toilets, there was a little landing half way down with a seat and some headphones, presumably so that you could have a mini rest and listen to some (at the time when I tested it) swing tunes :-)
And, though we didn't use it, I liked the wine-list-inna-book. 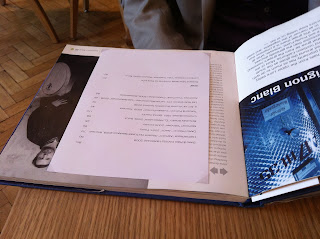 When we're feeling rich, we'll definitely revisit Viajante (maybe 9 courses next time, who knows...?) and I can certainly see us popping into the bar before that.

6 courses for lunch will set you back £50 per head with an extra £40 for the matching wines.
There are also 3 and 9 course menus available (and, I think, potentially 12 in the evenings).