A Feast For Your Eyes

When I saw the theme for this month's Bloggers Scream for Ice Cream challenge, I was a wee bit concerned.
Weirdly, I'm not an enormous fan of chocolatey ice creams (or puddings, actually), though I *obviously* am partial to a bit of the brown stuff from time to time...
When I mentioned it to husband, though, he was very clear about what we should do.
Feast - he said. And how could I refuse.
We did a bit of 'research' first. 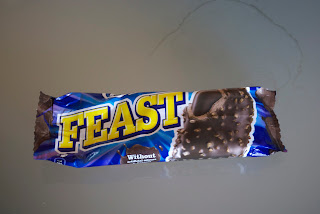 And made some decisions.
Although husband is still fairly enamoured, I really thought that the 'chocolate flavoured' whatnot that is in the middle and outside of the actual Feast tasted pretty nasty, so determined to use actual chocolate for our version.
Husband was keen to keep the bar in the middle quite soft, though, so I thought that a butter ganache rather than just solid chocolate was in order. 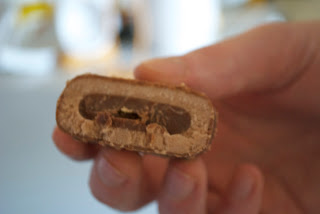 As previously mentioned, I'm not a massive lover of chocolate ice cream, so we decided to go for  a more 'grown up' salty butterscotch flavour instead.
I was very impressed by the crispy bits on the real Feast, though - in the distant recesses of my mind, they were nutty, but it turns out that they're actually more like biscuit bits, though very very crunchy - I'm not sure how they retain that. 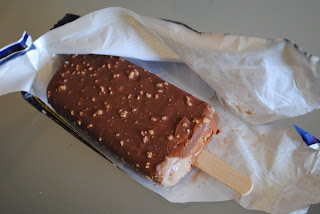 First of all, I made some custard, using my usual trusty ice cream recipe (6 egg yolks, 125g caster sugar, 500ml cream - I mixed single and double this time - and a split vanilla pod) and stuck it in the fridge overnight. 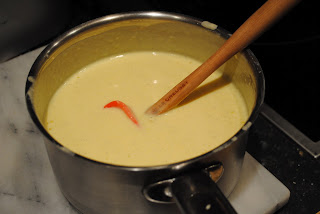 At the same time, I boiled up a load of golden caster sugar with a bit of water to make a thick, caramelly sugar syrup. 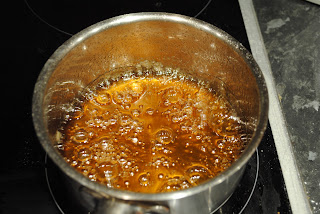 When it was ready, I (carefully) chucked in a bit of cream, some butter and a (generous) sprinkle of salt crystals.
I also stuck this into the fridge overnight, once it had stopped being so darned hot. 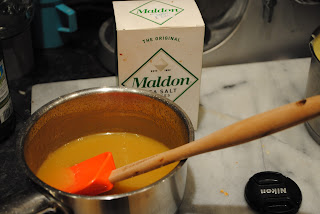 I churned the ice cream as usual the next day and, right at the end, swirled in the butterscotch sauce.
I don't seem to have a picture of this, but you get the general idea.
I stuck this in the freezer until I was ready for the next stage.
We didn't even eat *too* much of it in the interim.
I knocked up a quick ganache for the middles, using equal parts of cheap milk chocolate (for authenticity) and butter.
To fit the theme, I also chucked in a bit of sea salt.
I stuck this in a squarish tub and refrigerated it.
The next day, I cut it into little slabs, jammed lolly sticks into it and surrounded it with the (slightly softened) ice cream in foil parcels which I stuck back into the freezer to harden.
I do NOT recommend using foil - it didn't like peeling off again afterwards. Cling film might work, or baking parchment definitely would. 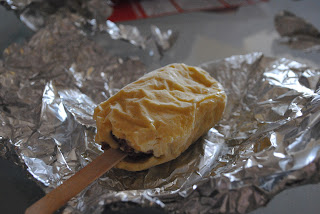 I would have liked to get a square, Feastier shape, but suspect that that would involve moulding, or, at the very least, cutting the ice cream from some kind of slab.
I am too lazy for such things! 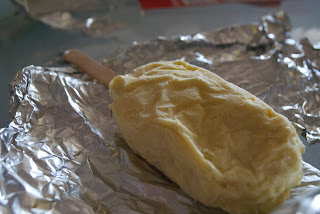 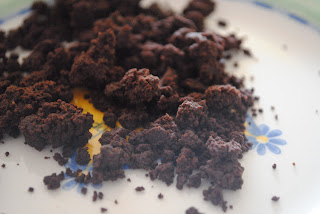 I rolled the lollies into the crumbs. 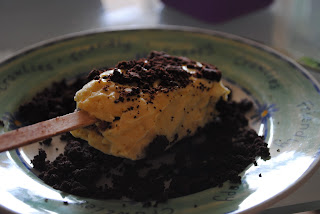 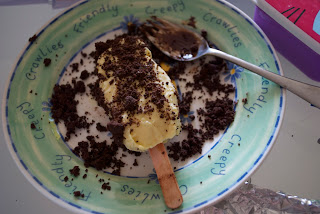 And then (very messily) coated them in the chocolate, before the lollies started to melt.
And, lo - Jennie's Own Feasts (even though they look more Magnummy). 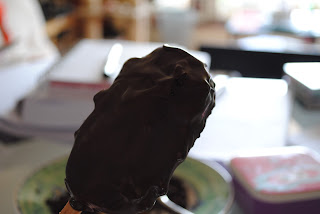 They went back into the freezer for a little while, just to be sure. 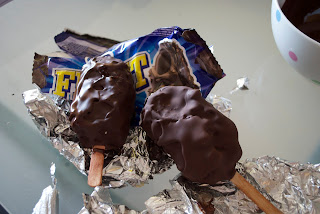 The proof of the pudding, as they say, is in the eating. 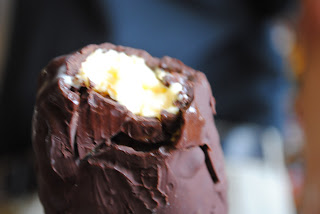 So we ate them. Or one of them, at least. 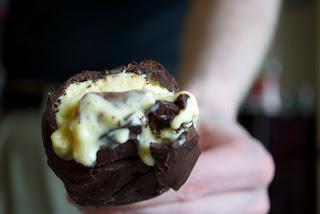 I was very pleased with the chocolate middles - convincingly soft, I thought, and the saltiness was good.
The ice cream was tasty, but that's kind of tried and tested, so I hadn't really been worried about it.
I was pleased with how scrunchy the scrunchy bits were - I'd been worried about them going soggy.
Husband would prefer milk chocolate on the outside next time - he reckons the dark is really too strong a flavour for the other bits. Milk is harder work, I think, but am prepared to give it a go.
Overall - a pleasing result.
Despite the lack of squarity :-)
This is my (last minute, as ever) entry for the Kavey Eats Bloggers Scream for Ice Cream challenge. 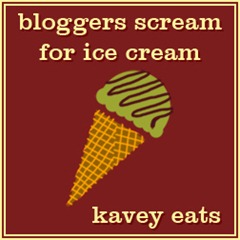