The second gift that I made for the Ndali Vanilla Gift Swap was inspired by the old rusty toffee hammer that my cousin found when we were clearing out my granddad's toolshed a year or so ago and rescued for me.

Obviously, the first thing I did on getting it home was to (google a recipe, and) make toffee to hammer with it.

It turns out that homemade toffee is both simple and delicious. AND you get to hit it with its own special tool - big win!

So - when I heard about the gift swap, I immediately started scouring eBay for a good toffee hammer so that I could make vanilla toffee - good gift, no? 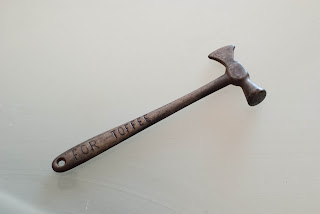 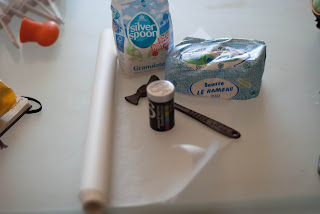 I melted 225g salted butter (you could use unsalted and add a sprinkle of salt) and a cup (apologies for the silly US measurement, but that's how it goes) of butter in a little saucepan and then slowly brought it to the boil, stirring all the time. 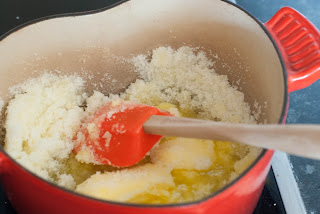 I boiled the mixture until it reached 'soft crack' stage - 153oC at which point I took it off the heat and stirred in a tsp of vanilla powder (the powder really comes into its own here - liquid would be impractical) and poured it onto baking parchment to set. 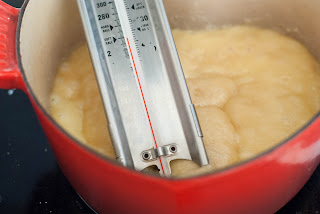 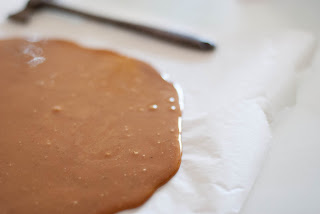 At this stage, for one of my batches, I sprinkled dark and white chocolate chips over the slab while it was still hot and they melted on in a very pleasing way.
You could easily add other toppings here - I am quite partial to flaked almonds and Maldon sea salt. 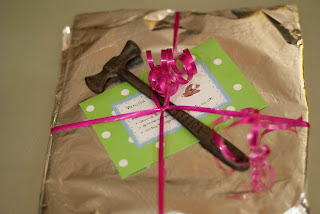 Obviously then you should hit with a hammer to break it up into edible pieces. Yum!