Today (or, in fact, since I didn't actually manage to post this on Saturday when I started writing it, yesterday) has been a proper Day Off.

I have finally learned how to make macarons (more on that later), read lots of weird lifestyle articles in online newspapers and been on an unexpected Saturday Date with my tasty husband :-)

We went to the cinema to see True Grit (which we both really enjoyed, despite both being sat next to the annoying-in-the-cinema-man-from-hell and the rather sudden tear-jerking ending, which really didn't give you time to recover yourself before stepping back into the bright lights of reality), made a brief stop for pre dinner cocktails (cucumber martini on the left - amazingly cucumbrous and berry capirinha on the right - berryey, limey and delicious) and then moved onto the shiny new Byron Burger on Upper Street.

I don't usually eat burgers, not because I don't love them or even because they make me into a Fat(ter) Little Piggie, but because they have a weird tendency to make me ill - I have no idea why - whether it's the meat or the bread or the cooking method or what... I've even been sensitive to chicken burgers in the past - is crazy.
However, I was tempted by some rather lovely pictures on Twitter last week and have been dreaming of tasty Byron Burgers ever since...

I loved it (and haven't had ANY side effects - maybe is because of Byron Burger, or maybe I am cured - I hope it's the latter!). Fantastic fast food, done really well - both efficient and delicious.
Because it's February (apparently) we were lucky enough to catch the Big D burger, which, amongst other things, has the advantage of being Twice the Size of any of the others. 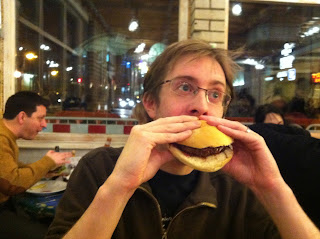 The husband had to open his mouth entertainingly wide to fit it all in (actually - there's a funnier picture of him doing exactly that, but in the interests of a happy marriage, I thought this one might be more diplomatic).
We accompanied our enorma-burgers with courgette fries (kind of like onion rings, but courgettier) and fries and happily availed ourselves of the splendid sauce selection (French's mustard tastes is I fondly imagine everything in America tastes - I love it). 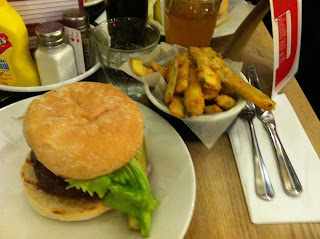 And husband had a surprisingly tasty American beer from New Orleans (his spiritual homeland) - the delightfully named Dixie. 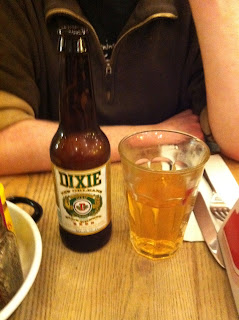 We didn't have pudding. I allowed myself to be talked out of a knickerbocker glory, but then totally kicked myself (and the naughty person that talked me out of it) when I saw the people next to us having one. I might not have needed it, or even particularly loved the taste of all the ice cream and squirty cream, but it was Oh So Very Beautiful - exactly what you see American children eating in movies :-)

Here's another burger shot, to take my mind off it, and in case you've not seen enough already.
See - see how bloody-nice (and also bloody lovely - hahahahahahaha). 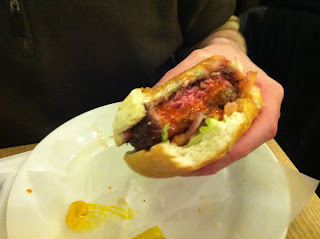 So - Byron Burger = awesome.
We'll definitely be going back, just as soon as we've worked off the current burgers.
And next time, there will be knickerbocker glories :-)