J and J Hit the F and F Supper Club

Last Thursday, husband and I schlepped along to Broadway Market to have dinner at the Fin and Flounder supper club.

I love Fin and Flounder - I love their beautiful fish and I love that they're open on Sundays for people like me :-)

We were a bit early, so we stopped in for a quick drink at The Dove - purveyor of many lovely Belgian beers (not just the crappy ones you get everywhere - the good stuff too!). We then hot-footed it across the road to F Cooke (usually the pie and mash shop, established, so it says, in 1862) - famous for it's jellied eels and liquor, and where it's seemingly always about twenty five to six... 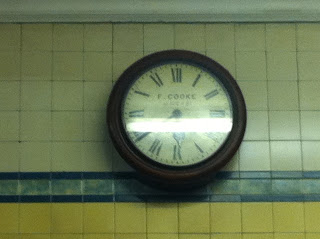 I'm definitely planning to come again for eeeeeeeels. Here's hoping I end up like this chap. 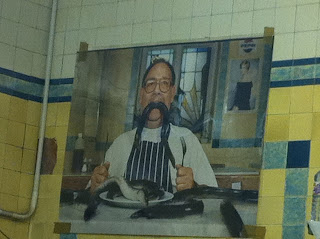 We were greeted by tables of lovely E5 Bakehouse bread where we settled ourselves in and cracked open our beautiful BYO wine. 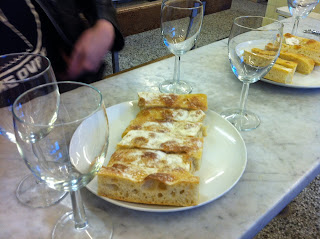 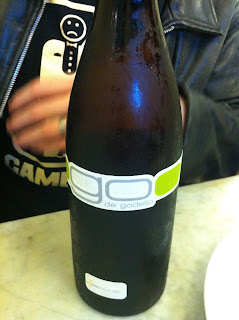 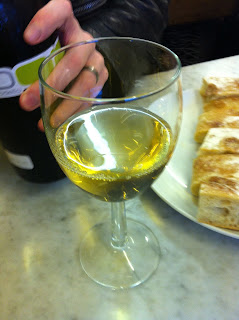 We were shortly presented with these - I love whelks - I frequently horrify my extended family buy buying and slurping them at the beach with vinegar. These were chopped into bits and deliciously garlic buttered and salted. It was husband's First Whelk Time. He was suitably impressed. 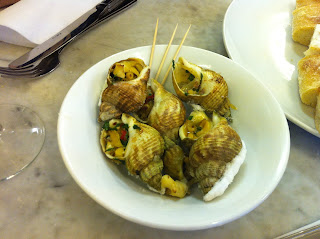 A little while later, we were joined by some tablemates and came into receipt of these tasty morsels.
Brioche, aioli and dover sole. Probably the dish of the evening for us. Next time we're in Fin and Flounder, we will definitely be looking out for the dover sole. 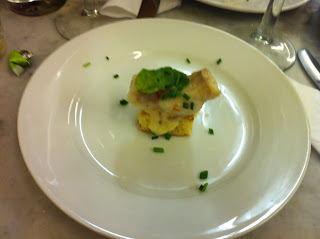 After another half an hour or so, there was mackerel. And a bowl of lemon wedges. I love mackerel. 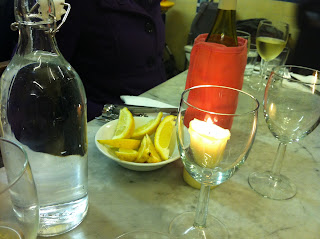 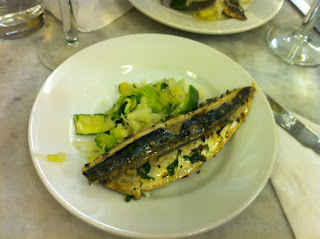 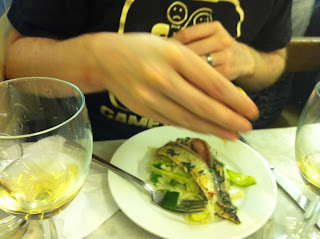 Then there was a bit more waiting. Husband was getting a bit restive, so we entertained ourselves with Home Alone faces. I no longer have any clue why. 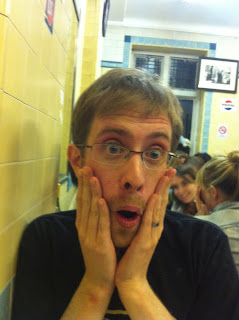 Then there was more (delicious) bread and many many moules marinieres. Interestingly, these were not super splendid. Husband and other table mates didn't like them at all. I'd have been happy to eat them (and probably did, in fact), but agreed that they were a little underwhelming.
I suspect that they were cooked in cheapy wine and think ours were a bit overcooked. Other tables seemed happier, so I wonder whether ours happened to come from the bottom of what must have been an enormous cooking pot.
There were lots of refills, but we didn't go for them. 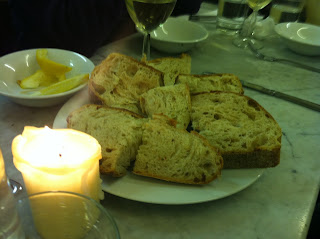 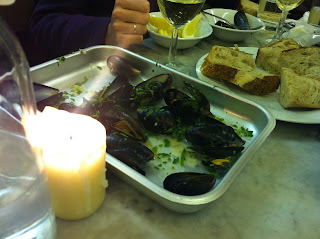 We went out to buy some additional beers. There was a tasty wee palate cleansing pre dessert thingy. Nice. Fruity and also pickled gingery. 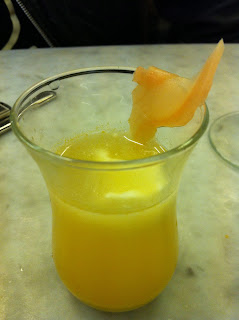 And then salt roasted pear in caramel sauce. Good caramel sauce, but undercooked pears. I'd probably have peeled it too. 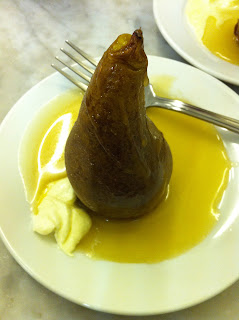 Overall, I'm glad we went.
The first three dishes were outstanding - I'd have been happy to eat them in any restaurant -  and we had a nice time.
It all took too long though. I know this is to be expected at a supper club, but the seating in F Cooke isn't really cosy enough to be sitting in for three or four hours - husband was definitely flagging by the end. And the fact that the final dishes were a bit disappointing didn't help the situation very much.
I'd go back, I think (though I suspect husband might not), but I'd go with a group next time - I think it would probably work better for me as a large social event - certainly the big groups were all having a great time.
Posted by Miss Whiplash at 21:10

Email ThisBlogThis!Share to TwitterShare to FacebookShare to Pinterest
Labels: Fin and Flounder