Something Fishy (and a LOT of photographs)

Last week, I had a work time daydream about fish pie.
I don't know where it came from, but I got all obsessed with it and, in the end, gave in to Destiny and asked the lovely elves at Hubbub to bring me some tasty fishes.

The ingredients (excluding flour and butter, which I forgot to parade). 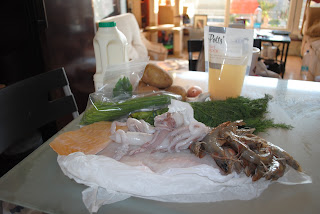 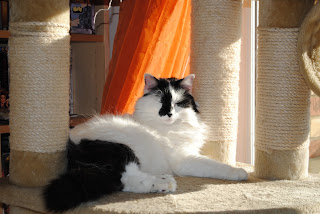 I laboriously peeled the prawns 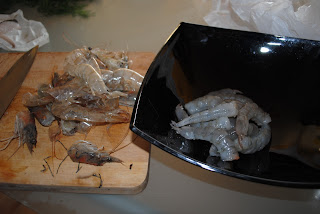 And hacked up the squid 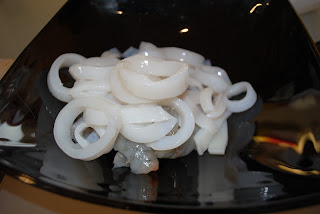 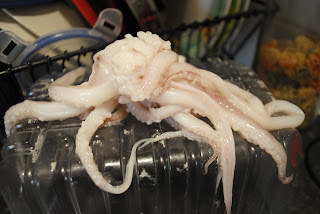 And then I fried them briefly in a bit of olive oil. 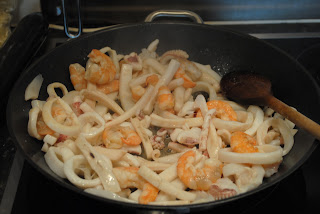 I chopped up the shallots and garlic 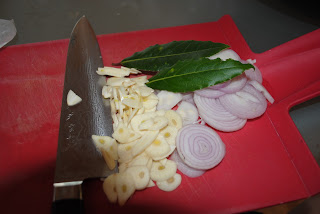 And added them to some milk and fish stock along with a couple of bay leaves, seasoned and brought to the boil. 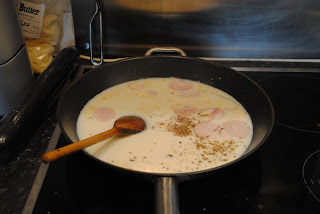 I poached my cod (it was supposed to be pollack, but they had run out) and (gorgeous) smoked haddock fillets in the simmering mix for a few minutes and then took them out and flaked them.
I don't seem to have photographed this bit - maybe it didn't look nice - but I also removed the onion and garlic bits (mostly) and decanted the liquid into a measuring jug.

At this point, I required some rejuvenating sherry. Obviously. 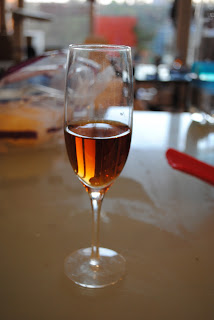 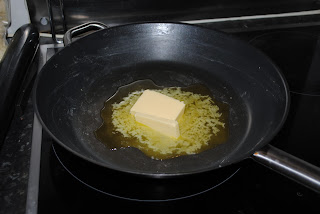 And then chucked in some flour to make a roux, which I cooked for ten minutes or so to get rid of the floury taste. 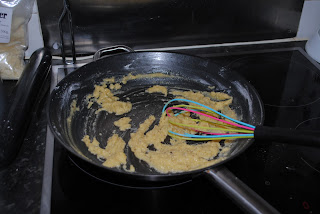 I added the stock/milk back really gradually, whisking it in all the time. I cooked gently for another ten minutes or so, and then seasoned and stirred in some mustard. 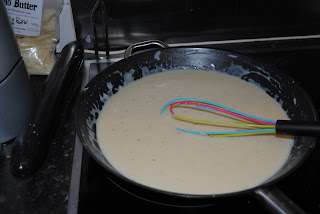 OK everyone - stick with me - we're nearly done. 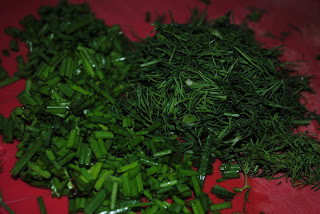 The herbs, various fish bits and shallots garlic all went into an oven dish (well, two, in fact, as it turned out there was quite a lot of it) and got all mixed up. 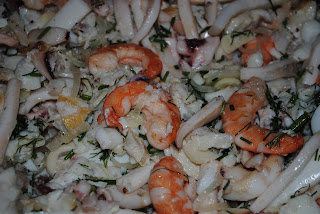 I splodged the béchamel on top and mixed it in a bit. 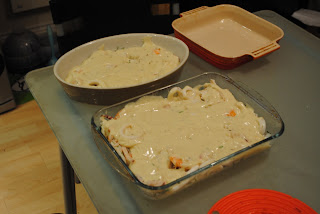 In the background of all of this, I had been cunningly "baking" some potatoes in the microwave.
When they were cooked and cool, I emptied them into a bowl and "mashed" with my hands.
You could, of course, boil and mash them in the usual manner, but my way is far lazier and also means that you don't have to add lots of butter and things. Cunning, no? 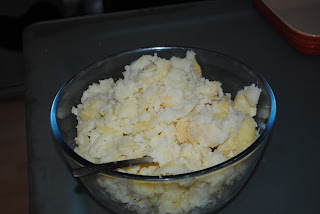 I squidged handfuls of potato into patty shapes and put them on top of the fish mixture, covering it totally. I forked the tops to ensure sufficient scrunchy bits, before sticking them in the oven (180 - 200) for 40 mins or so.
And this is how they look. 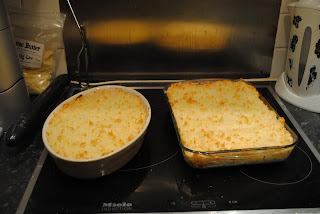 Tragically, I'm unable to report back on what they taste like yet, as I have to save them for tomorrow.
However, having been nibbling the component parts all day, I'm not too worried :-)
I intend to eat them with tasty greens and lashings of ketchup/sweet chilli sauce.

NB: I'd like to have put a layer of boiled egg slices in on top of the fish and under the béchamel, but husband is not a fan of eggs. Weird, I know. He's fairly normal apart from that.
Posted by Miss Whiplash at 00:17