We bought a big chicken.

Husband hacked it (very prettily) into eight lovely pieces and I pankoed up a couple of them and made us katsu curry... 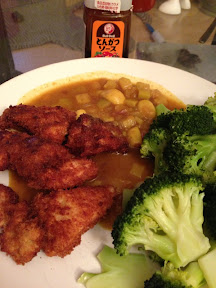 I'm editing this now, after the event, lest anyone wants to know how I made it.
It was very very easy:

First I made the sauce - I sweated a chopped onion, some whole garlic cloves and a diced kohlrabi (I guess pretty much any veg are fair game here - I think it usually has carrots and things) in some groundnut oil in a little saucepan with a lid on it for about ten minutes.

I then stirred in some (probably two or three tablespoons - I just dolloped it in) flour and a good dash of curry powder (generic - just whatever I had in the cupboard) and cooked over medium heat for another minute or two.

I chucked in some chicken stock (a bit at a time, so as not to be lumpy) and brought the whole lot to the boil before adding some soy sauce and honey to taste and simmering for ten mins or so to thicken a bit. Obviuosly more flour/less liquid would have made a thicker sauce and other tasty veg and spices would probably also be nice, but mine was a pretty convincing katsu curry sauce flavour.

I chopped a big chicken breast into chunks, which I dipped in seasoned flour, beaten egg and finally panko breadcrumbs and fried in hot oil in a wok-type pan.
I did it in a centimetre of so of oil, but deep frying might work better if one can be bothered.

Then it was just a matter of assembling and liberally dousing with Bulldog sauce (which is pleasingly similar to a fruity version of the Edinburgh chipshop 'sauce' which anyone who has ever lived there surely yearns for in the same way that I do) and hey presto - chicken katsu curry :)

The broccoli is optional - rice is probably more of a conventional option. Husband had both...

- Posted using BlogPress from my iPhone
Posted by Miss Whiplash at 20:27