A few weeks ago, I excitedly made a booking for the new Hawksmoor Guildhall soft opening...
I booked an afternoon off work, ate a teeny tiny breakfast, omitted to make a packed lunch and then disaster struck... They had a kitchen fire and closed for 48 hours. Much sadness was in my world...
However, the nice Hawksmoor people were extremely lovely and helpful under what must have been horrible circumstances and made me a new reservation for lunch the following week.
AND, on Thursday, it was finally time!
I know lots of people have already said it, but I hadn't really been ready for the sheer scale of the place. It's enormous. I'd only been to Spitalfields previously, which is quite moderate and snug. The new Guildhall restaurant is not. It's vast. And very oak panelled and glossy. Not AT ALL good for taking iPhone photos, so apologies for the quality!
We were shown to our table and immediately snuggled down with the menu and wine list.
There is also an extensive and delightful looking cocktail list, but husband somehow managed to talk me into being sensible, it being only 1pm and all.
I won with the ordering though I silenced his hmming and haaing over how hungry once could possibly be at lunchtime and manfully ordered us the plum pudding ribs starter. 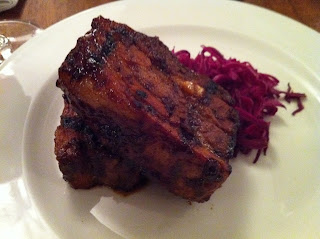 Ribs were melty meaty good and smothered in a delicious sticky marinade (which, I assume, provided the plum pudding element). The pickled cabbage was a lovely vinegary, very slightly scrunchy contrast.
It was quite salty. I like salt, but found it only just on the right side of the salt borderline. Husband felt similarly. Extremely enjoyable overall. He will defer to my superior starter judgement without a fight in future, surely :-)
We ordered steak mains, obviously.
Husband had the fillet and I had the (super aged) D rump (which, in my mind, will always be drump). Both turned out to be good steak choices. The people on the table next to us (who were, as was almost the whole clientele, well dressed city gents - no strangers to the steak lunch, I would say) had, I think, ribeyes, which were a much thinner cut. I think they were a bit jealous and resentful :-)
This is the fillet - husband ordered it very rare - bleu, and wasn't totally sure that that was what he actually got. However, there was no denying that it was delicious. 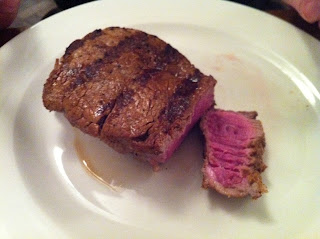 My Drump - rare. Beautiful. Sometimes I think I like other steak cuts better, but, honestly, is there anything that can compare to the flavour of a nice bit of rump? 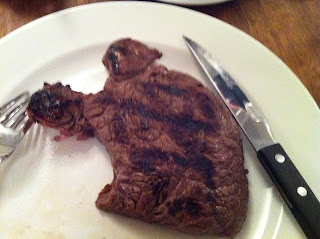 We had sides of macaroni cheese (not something I would usually consider a side dish, tbh, but there's been so much raving about it, that I felt we ought to try), bone marrow and buttered sprouts with chestnuts. 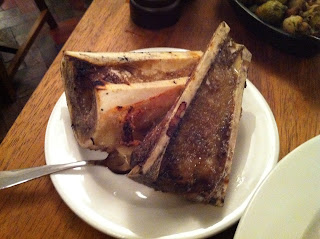 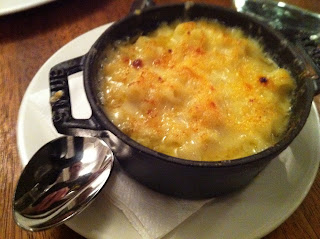 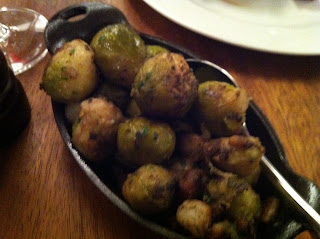 So mains overall - fillet possibly done a little harder than requested and, like the ribs, both steaks were certainly on the edge of being oversalted. The meat was beautiful and flavourful though, and I loved the chargrilliness.
The macaroni cheese was nice, but I maintain that it's a weird side dish. I don't think we loved it as much as the rest of the world, but husband isn't a massive fan of cheese (I know, I know, but we're very well matched in lots of other ways ;-) ) and I don't *love* macaroni.
The bone marrow was hot, bone marrowy and delicious, but the star of the sides was indubitably the sprouts - buttery and lovely, retaining a little bit of scrunch and delightfully complimented by chestnuts and teeny tiny onions. Yum.
We drank four different wines by the glass (hence the non photographing thereof) - two French, one Italian and an Argentinian. All very good and in a variety of entertaining shaped glasses.
I'd have quite like a small foray into the world of desserts, but we really were a bit stuffed by this stage, and, in fact, none of them leapt off the page at me as major must haves. I suspect that's more to do with me than with the quality of the offerings - I'm not a massive hot pudding person and, as winter is approaching, that seemed to be the general theme.
When the bill arrived, our 50% soft opening food discount was magically deducted without us even asking, even though we were there a week late and after the official opening date.
The service was delightful - attentive without being annoying and really friendly and we enjoyed the food.
With the discount, I'd definitely go back. Without, I'd have to think a little bit harder - possibly for a special occasion, though I might specify that I wanted my steaks a wee bit less salty if at all possible.
I fancy the breakfasts though - they look absolutely amazing.
Now, how can I persuade husband to get up in the actual morning to come with me....?
Posted by Miss Whiplash at 00:49