The leaves are turning brown, skies are greying, the autumn nights are drawing in and GBBO is over for another year...


Despite many good intentions, that almost certainly means mothballing the blog again, but before I go, here is my final GBBO bake along of the year.

I enjoyed the final - the right person won, the nation was in tears and we ate a lot of cheese while it happened.


As in previous years, though, I was a bit surprised by the comparative simplicity of the tasks - the millefeuilles seemed fairly straightforward (though allegedly were chosen because all three finalists had had pastry problems in the past), though were reasonably cheering from my lots-of-leftover-rough-puff-in-the-fridge perspective and the showstopper specification seemed vague enough just to be saying "bake a nice cake" (which is not unreasonable).


Once again, though, my real interest was in the signature bake. Iced buns! Noone could fail to be cheered by an iced bun!


The TV ones had to be filled, but I felt like that was a little unnecessary for my purposes (though it would be easy enough to fill with cream and jam as desired, obviously) and would make them less portable. Well - maybe one. Just to see how it tasted.


I used a bun dough recipe from Darina Allen's Forgotten Skills of Cooking (a genuinely brilliant book that I honestly don't look at or use enough), which is a fairly standard, slightly sweet, yeasted dough enriched with butter and eggs (though, interestingly, not milk).

It's actually a really good dough - I've used it in the past for everything from chelsea buns to doughnuts and they've all been delightful.

As an aside, I fairly recently discovered that it was possible to buy fresh yeast from Morrisons, so now I make everything with (usually frozen) fresh instead of dried or instant. I don't know why I should be surprised by this, but it is MUCH MUCH better. Everyone needs to get back into fresh yeast! Given that it freezes so easily, it's really no more trouble than the dried kind and your bread will be far superior!

I opted for the traditional finger shape (I'm not remotely precious about them being batch cooked, stuck together and torn apart - I actually rather like the effect) with white royal icing on top, but they'd be equally good round with cherries and or happy faces.

I also left mine plain, as I prefer them that way, but they lend themselves pretty well to having dried fruit added at the final shaping stage if you're that way inclined.

So that's it - I am all baked along for another year and will now be grabbing hold of the opportunity to stop eating for a few weeks. Thanks for reading!

I actually made the pastry for my cream horns AGES ago, but it's been sitting in the fridge for a bit, as it struck me that cream horns were a touch on the impractical side when it comes to transporting to work or to the rowing club or wherever, so I've been putting off the actual baking part.

Anyway - week 8 was Patisserie week. I'm honestly not sure that there is a difference between pastry (see week 6) and patisserie, but I assume what they were looking for here was something a bit posher. Posh pastry!

This included the most ridiculous showstopper yet, the amazing religieuse a l'ancienne, a kind of tower of eclairs allegedly in the shape of a nun. Definitely recipe for tears and collapses.
The technical whatnot was a mokatine, which seemed to be a wee coffee cake with added complexity.

The signature bake, though, my own particular interest, was the cream horn - a deceptively simple bit of baking and one that, unexpectedly, I had never attempted before.

I did, however, turn out to have a set of metal cream horn cone mould things (leftover from this wee escapade), so I was all set!

Having watched the show, I opted for a rough puff pastry (courtesy, once again, of Pastry) using a mix of plain and strong flour for added non-falling-apart-ness.
I rolled it out thinly (possibly not thinly enough - I'll know better next time) when I did eventually get round to doing the baking part, cut it into strips, wound it round the cones, painted it with egg white and sugar and baked them till they were done.
I was quite boring and just filled them with a slightly vanillaey mix of whipped cream and mascarpone, with a bit of jam in the bottom for a bit of interest. 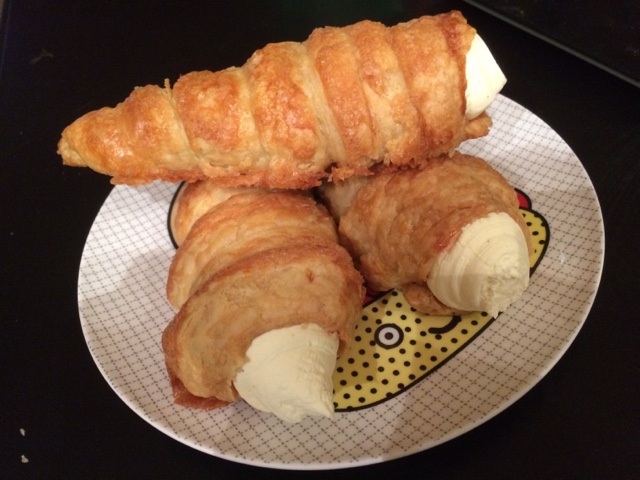 They were good - the pastry in particular was v pleasing -  I might do them again.
Probably just as well, as there is still pastry in the fridge. 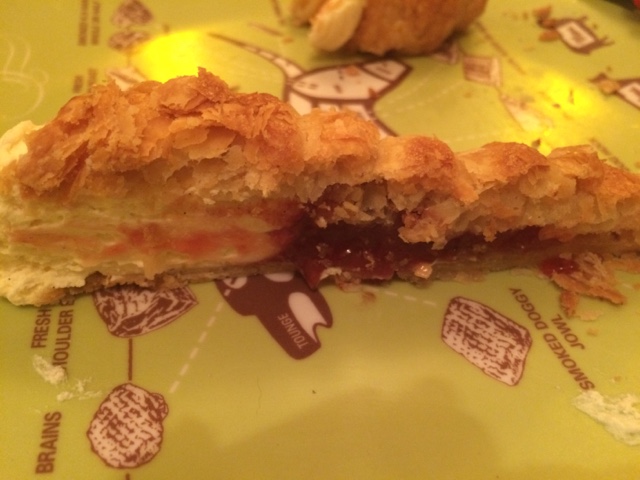 All this was followed by Week 9 - Chocolate Week.
Technical chocolate soufflés were the order of the day with a side of further tears and collapses (I've never made a chocolate soufflé either, so no judgement from me).
I failed to completely understand the showstopper on this episode - maybe I should watch it again and pay a bit more attention to the specification - it seemed to be a Chocolate Thing Including Biscuits. Anyway, it all looked very exciting and, honestly, who doesn't love a working chocolate well?
I was quite pleased to see that the signature bake was a chocolate tart, though a little more dismayed that it required chocolate pastry (and not *just* because there is a lump of "spare" shortcrust currently in residence in my fridge).
This wide brief was a bit of an issue. I could just have made a ganache type chocolate tart or maybe one in a baked custard style, but that seemed a bit dull in lots of ways.
I'm quite a fan of baked goods based on cheap chocolate bars - I've made some nice Twix themed tarts in the past and am partial to sticking caramel and chocolate in a sponge and describing it as a Rolo cake, so I went for something along those lines.
I surveyed my colleagues and Milky Ways came up reasonably often, which seemed as good a way to decide as any.
Having said that, research determined that American Milky Ways have a layer of caramel (though are still somehow distinct from a Mars Bar - not certain how that works) and a layer of caramel never made anything worse. Thus a plan was made.
I made a chocolate shortcrust with a mixture of lard and butter (mine was unsweetened - I thought the filling would be sugary enough). It turns out that the contestants weren't wrong when they made all that fuss about chocolate pastry - replacing a bit of flour in your shortcrust with cocoa powder really does make it a bit weird... Having said that, it was also pleasingly short when baked, so, y'know, silver linings and all that!
I blind baked it for a bit, then took out the baking beans, brushed it with egg white and baked it a bit longer till it was nice and crispy.
I made an experimental caramel with a bit of vanilla and mascarpone instead of cream (fridge supply limitations), cooled it a bit, poured it into my tart case and cooled it in the fridge.
The mascarpone made a nice sauce - slightly sharper than sometimes - though I'd make it a bit thicker next time, I think, for slightly better setting potential.
I made a weak ganache/cream thing from a bit of milk chocolate, cream and a smidge of butter.
If I'd been a bit cleverer about this, I'd have refrigerated it overnight and then whipped it, but that turns out to be difficult without a bit of foresight. I did chill it a bit, though.
I whisked some egg whites with sugar into a meringuey thing (again - next time, maybe Swiss or Italian meringue for extra stability, though I do like the fluffiness of the raw white).
I folded the whites into the chocolatey cream to make a kind of mousse and poured/spread it over the caramel layer to almost fill my tart and stuck it back in the fridge (whilst simultaneously sticking the leftover "overflow mousse" into my mouth).
I was going to make a beautiful shiny tempered chocolate topping for the whole thing, until I remembered that, whilst it would be very pretty (and would doubtless elicit gasps of awe at my beautiful tempering skills), combined with quite a soft filling, it would render my tart completely impossible to slice, so I opted for a buttery (and a teeny bit golden syrupy) ganache thing instead. 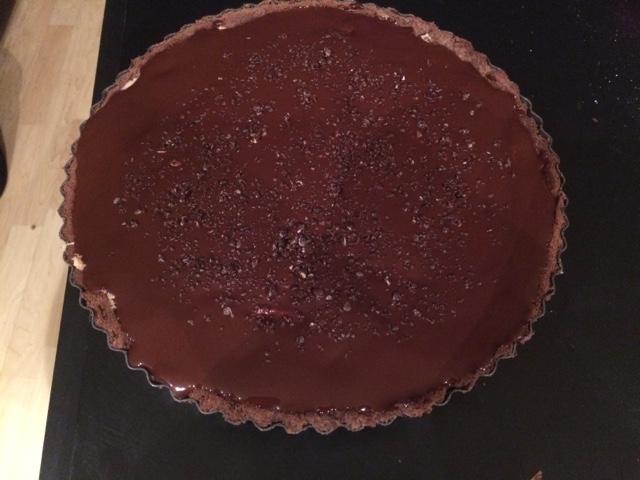 Oof - well done for reading if you've made it this far! 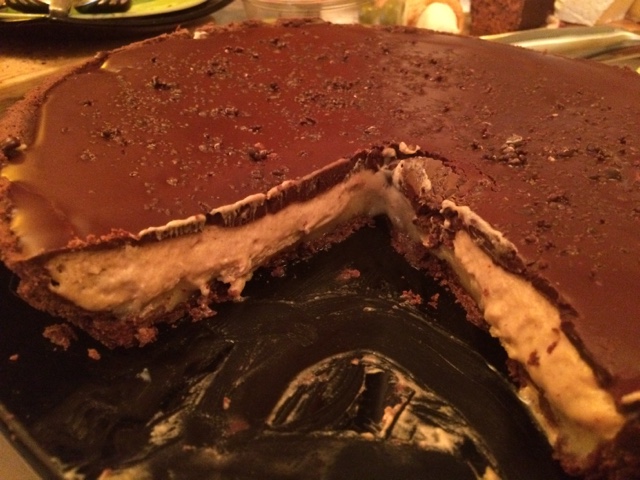 We ate both these things while watching the actual real GBBO final, which was pleasing.
Just one more bakealong to go, that means - iced buns for the win!