So, Bread Week...
I believe I have expressed my opinions on Bread Week before, so perhaps I won't go into it too much here, but suffice to say, I think there have been problems with realistic timings in the past.
Trying, for example, to make brioche or ciabatta in the time allotted is clearly ridiculous - either they have WAY more time than it looks like on television, or they are just tasting 12 (11?) inedibly undercooked loaves.
In any case, enough of that, and I shall move on to say that I think the signature bake thus week was, under the circumstances, an extremely sensible choice - lovely soda bread - no silly proving time, no fuss over whether of not it is "better" to knead things by hand etc etc...

Personally, I am extremely fond of soda bread - a perfect compromise between breadiness and cakiness, as well as being super swift and easy to make (honestly, SO quick - I easily made it AND my dinner whilst actually watching the episode).

Now, I have a large (some might say excessive) number of books about how to make bread, many of them written by v wise people with much science, cleverness and lovely pictures.
However, the book that I use the most and the one containing the basis of the soda bread recipe I used today is this - the Christian Aid Book of Bread. It has no pictures and no famous master bakers, but I love it dearly, use it extremely frequently, and thoroughly recommend it to all of you. 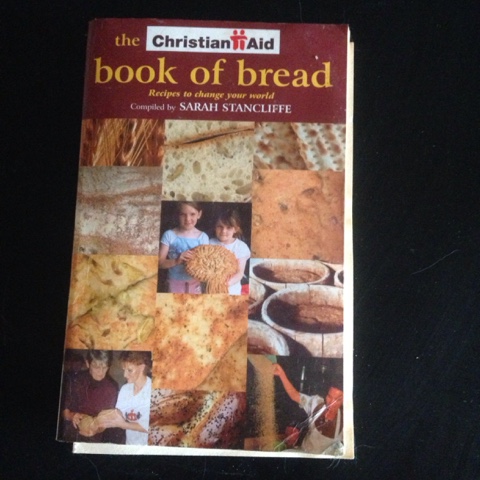 I didn't have any proper buttermilk, so I chucked in a bit of yogurt and some slightly Heath Robinsonesque "buttermilk" made of milk and vinegar.
I also (rather uncharacteristically) signatured up my bread with pumpkin seeds, as a) they are delicious and b) I happened to find some in a drawer. 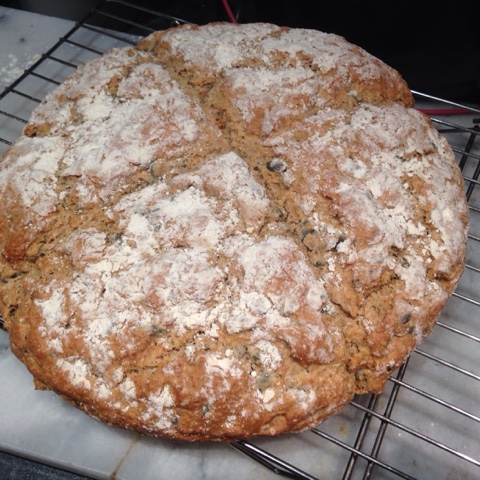 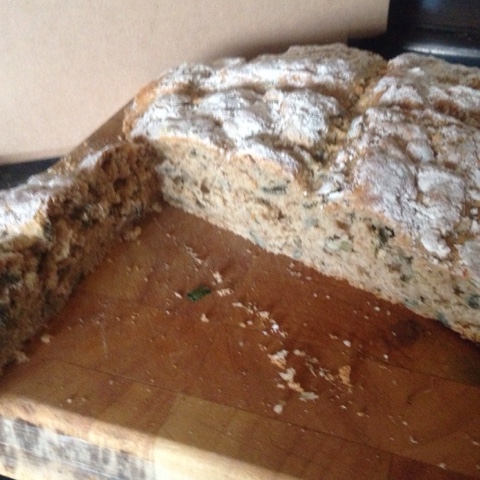 I vaguely heard someone mention Desserts in a next episode type context, as I was taking my loaf out of the oven, which is an extremely cheering prospect.
I'm on holiday next week, though, so my dessert making facilities may be somewhat limited. I guess we'll see what happens...
Posted by Miss Whiplash at 00:16 No comments:

I missed the second episode of GBBO on Wednesday evening, due to an overdue appointment with some nice people and a great big pizza.
I was a little worried that I might never see it, due to the tragic broadband drought that was going on at my flat, but happily BT came up with the goods and I managed to catch up last night.

Biscuit week seems a bit unpopular on the Social Meejas - I'm not really sure why - I love a nice biscuit.
I'm a little less certain about boxes/structures made of biscuits, tbh, but I can only assume that some people love them (and consider them a worthwhile endeavour).

Biscotti, I am happy with - they can appear a slightly odd beast, I think, until (rather like last week's cake, in fact) you realise that they are much improved by an accompanying glass of something (vin santo if you can find a nice one - I might just reuse the Madeira) to dip them in!

My recipe was a slightly bastardised version of the one from "500 Cookies", a slightly eccentric but very heavily used book that I have had for a fair chunk of forever.

I was a bit unsure about the wisdom of putting dried fruit in biscotti, what with the twice cooking and everything, but it seems to be A Thing, so I went for sour cherry and almond, with a wee bit of orange zest and extract.

They were super easy and came out beautifully, if a touch on the large side - I've made quite a few biscotti in my time, and never quite got the hang of making the initial "loaves" a sensible size.

I confess that I don't really understand the obsession on GBBO with making things a uniform size - part of the joy of things like these biscotti is that they are cut from a loaf, which, by its very nature, is likely to taper at the extremeties... What do they expect you to do with the ends (the Best Bits!)? Throw them away?
Anyway - mine are large and unwieldy, in no way the same size as each other and (as far as I can tell) just tooth-breaking enough and, in my opinion, that is exactly how they should be. 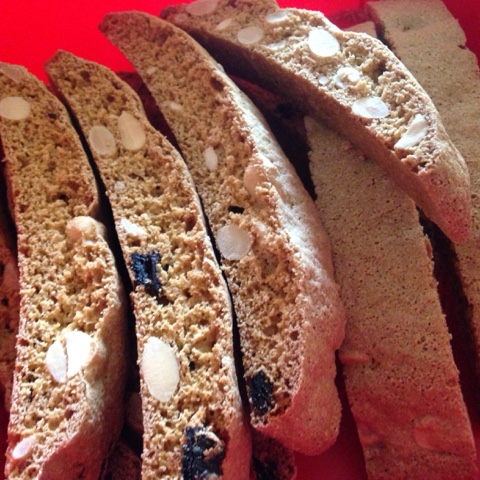 Next week is, apparently, Bread Week - officially the stupidest week to try to squash into two short days of baking... I clearly wasn't really paying attention as I have no clue what the signature bake is going to be - I guess it will be a nice surprise when I find out!

It can hardly have escaped your attention that the Great British Bake Off is back on our screens (though actually, I almost missed it yesterday, so perhaps that's not *entirely* true) and it began in style last night with Cake Week.
In my excitement, I decided that a new year of Bakealongs would be appropriate, so I have dredged up the password to this blog from the deep recesses of my mind to bring it to you - don't all thank me at once!
For variety (and because I thought the technical challenges were getting a bit, well, desperate last year), I have opted to bake along with the signature bakes this time (though happily, because I am not being judged, I do not have to add any of my own "twists") so here we go - Madeira cake...
And just for added excitement (and because I didn't have any), I also candied some lemon peel.
I have no idea where this recipe comes from - it's just one I know (I'm pretty sure it's fairly standard) - so apologies if it's yours and I haven't credited you!
Ingredients
175g butter
175g caster sugar
Zest of one lemon
220g SR flour
50g ground almonds (for added niceness)
Pinch of salt
3 large eggs
Optional candied peel to decorate.
Method
I preheated my (fan) oven to about 160.
Although the recipes seem to say that you should just chuck everything in together and mix it, I can't quite bring myself to do that, so I creamed my butter, sugar and zest together first.
The I just chucked everything else in and beat it for a minute or so to make sure everything was nicely combined.
I greased and lined a 2lb loaf tin, chucked the mixture in it and baked for an hour.
If I had been super organised, I'd have taken it out half way and stuck my candied peel on top, but I wasn't and the candying (that must be the right word?) was still underway at that stage.
When I took it out of the oven, I glazed it with the syrup handily left over from my candied peel exploits and stuck a couple of bits on top.
And here it is! 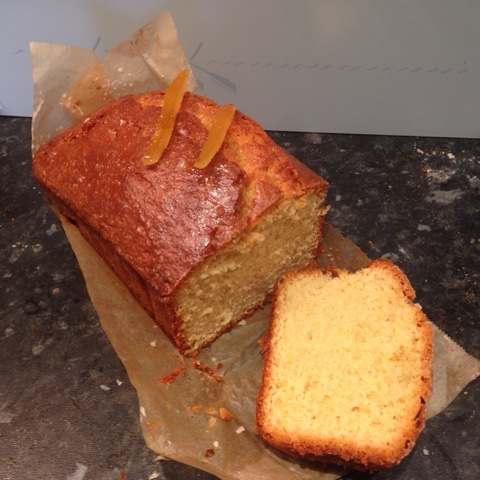 It looks fairly convincing, I think, and it does indeed have the requisite crack in the top (I had no idea this was such a stringent requirement till watching the show last night - I just thought it was a thing that happened).
Madeira cake by its very nature tends to be a bit "boring", I think - which I guess is where the actual Madeira comes in (though I think that slices with jam and butter are also a valid option).
Shockingly, our wine cellar is a total Madeira desert at the moment, but I feel reasonably sure that can be addressed.
Now - anyone for some candied lemon peel? 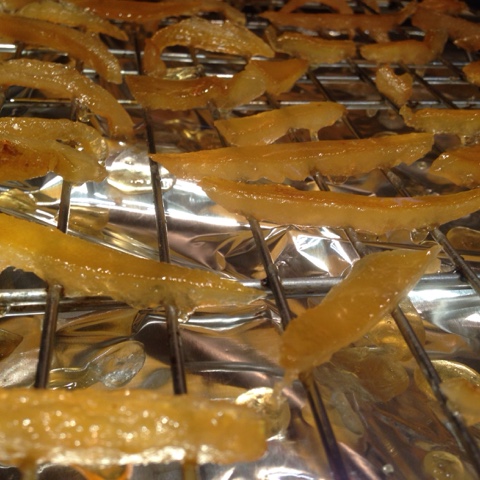