Baking Along With GBBO: Week Six and Seven: Prinsesstårta and Kouign Amann

I've been doing a bit more catching up this weekend - two quite fun technical challenges in the most recent episodes, I thought...

Week six brought us the Prinsesstårta (Swedish Princess Cake, as seen in Ikea and also, presumably, Sweden), a rather bizarre looking green monstrosity - sponge, jam and creamy stuff covered with green marzipan and a pink rose, said to have been invented in the 1930s for some actual Scandinavian princesses.

The GBBO recipe for this is (and clearly was on the actual programme too) completely bonkers, requiring that you not only make the cake and the cream and creme patissiere fillings, but also the jam and the marzipan. I'm pretty sure that in Real Life, I wouldn't bother with many of these things, but, for the sake of authenticity, I did as I was told this time. 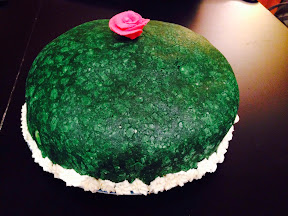 I definitely wouldn't have wanted to do this one in the time - I did mine over two days - I made most of the bits and pieces on day one and then the final cream whippage, marzipan and assembly on day two. 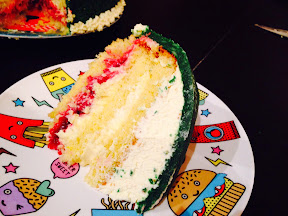 Next time, I would definitely make my creme patissiere a bit thicker - it would be easier to deal with and would give thicker layers.

I *might* also consider making the green a bit less green for authenticity, but I quite like my leafy colour - those gel colours are just too awesome to waste on pastel shades!

Again, not great for taking to work, but I shall see what I can do, as I don't think it's really reasonable to expect poor husband to eat the whole thing.

The Breton Kouign Amann from episode seven, on the other hand are an entirely different prospect.
Nice and straightforward to make, the main problem they seemed to create on TV was just the fact that nobody had any idea what they were making!

I, obviously, having seen their efforts, didn't have the same problem, so breezed through the recipe (admittedly at a far more leisurely pace). 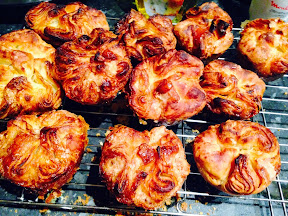 They seem a bit like making croissants - bread dough with layers of butter - rolled and folded in the manner of puff pastry, with a bit of caramelly added sugar. 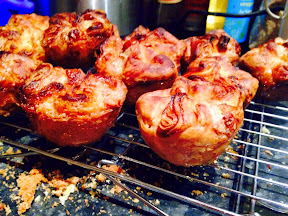 These are MUCH more transportable, and I'll have to hide them from husband, as they are utterly delicious. 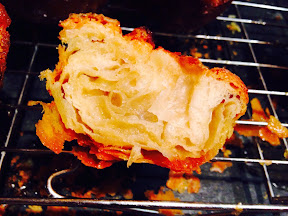 I will definitely make them again - sweet and flakey, they would be ideal for breakfast or elevenses.
Posted by Miss Whiplash at 22:58