Yesterday was my granddad's funeral. He died just before Christmas.

He was 90 years old, which is, by anyone's standards, a pretty good innings, so I'm not sad for him.
I'm sad for me, though, and for all of us that he's left behind.

He did a lot in his 90 years - more, probably, than I will ever know about, and almost certainly more than most of us will ever do.
When he was 15, he ran away to sea and joined the merchant navy. When I first knew him (some number of years later), he was a marine pilot. He was also, variously, a boat surveyor, a councillor, a younger brother at Trinity House, the chairman of the local health authority, the chairman of the county college and countless other things.

He knew everything - a handy skill when trawling through the myriad crosswords that my Granny used to make us all (when we were there - probably mostly him, when we weren't) do every day - I'm pretty sure I don't know anyone else with that kind of crazy general knowledge - and had been everywhere - all over the World.

He had a succession of dogs, cats and other animals that just seemed to turn up - I don't think he ever went out looking for them, but, until a few years ago, he always had at least one on the go. Even after the last of his own dogs was gone, all the others (really all) in town knew who's pockets to go rooting through for biscuits.

He and my Granny did an unbelievable amount of work for charity - between them they must have raised tens of thousands of pounds over the years.

He didn't always see eye to eye with everyone in terms of opinions and things, but would rarely have let them know it, because, fundamentally, he was someone who liked people. And they liked him. All of them. You couldn't walk down the street with him without meeting someone that he knew and without, often, making new friends as well.

Gramps used to tell us all separately, that we were his Favourite Grandchild (such troublemaking!). We all knew this, of course, but I think that, deep down, we probably all also knew that it was true - we were. Despite all the globetrotting and adventure, he was a proper family man, and really quite devoted to his mother, brothers, my Granny, my mum, us - the grandchildren and his new great grandchildren, as were we to him.

As well as all this, he was fun - so much fun - and kind, and the World will be a greyer place without him in it.

But we are lucky to have had someone like that in our lives - most people probably never even get that - and, although I will miss him loads, I know that I am a happier and better person for that. 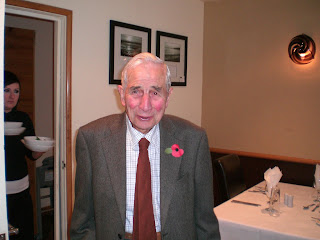