I haven't written anything here for several hundred years (again), so here's a quick something that I did a couple of weeks ago.

For a few months now, I have been occasionally volunteering for a very very lovely charity called Free Cakes For Kids in Hackney, which is the local branch of a small national charity which provides cakes (mostly birthday cakes) to children who wouldn't otherwise get them - local bakers bake things and deliver them to schools, nurseries etc - all very simple.

It seems a small thing, but for most of us (certainly for me), birthday cakes and parties as a child were genuinely formative events, and there are few of mine that I don't remember extremely clearly*.
It is a sad fact that, actually, birthday cakes are expensive (in cash and time terms) to produce or provide, and there are people for whom they are an unaffordable luxury.
For someone like me, who obsessively bakes unnecessary things and is always on the lookout for new cake victims, this is really a pretty obvious collaboration.

My most recent cake was for a fifth birthday party and had a Rainbow Dash (nope - I didn't know either) brief.

Rainbow Dash, as it turns out, is one of the new breed of My Little Ponies (pretty sure they didn't have names when I used to have them), as husband discovered during extensive "research" through the medium of YouTube (thus becoming a member of a slightly odd new social group).

Anyway, since she is a rainbow character, a rainbow cake seemed like the way to go.
I toyed with the idea of making a sugarpaste pony or piping her onto the top, but, honestly, life is too short, and I figured that, if it was MY fifth birthday, I'd probably prefer a Rainbow Dash that I could actually keep afterwards, in any case.
I was also tempted to cut out the middle of the cake and fill it with (rainbow themed, obviously) skittles or similar, so that they would all come pouring out when it was cut, but, as I had to deliver first thing in the morning, I was a bit worried about leaving them in there overnight in case the colour ran and made some kind of unholy sludgy mess, so I wimped out. I still quite fancy this for another time.

So - here's how it all went down (I wrote this recipe out, fairly hurriedly, for the FCFK website - I hope it makes sense)...


Ingredients:
6 eggs
Weight of the eggs in butter (or margarine), caster sugar and self raising flour
Vanilla extract (for the cake)
Pinch of salt
Rainbow coloured gel food colours (I used red, orange, yellow, green, blue, purple – no indigo – I’m not totally sure I know what indigo even is) – these are fantastic – much better than the liquid colours of my youth – unbelievably strong colours even when baked.
Jam
250g block of butter
650g icing sugar
Vanilla extract (for the icing)

Method:
I made the cake in three batches (mainly because I only have one set of sandwich cake tins and one oven).
-       *Weigh two eggs and preheat the oven to 180 (165 fan).
-       Weight the same amount of butter (margarine) and sugar into a bowl and add a splodge of vanilla extract. Cream this until it goes white and fluffy (I did it with a stand mixer, but a hand whisk or wooden spoon is also totally viable).
-       Measure out (separately) the same weight of flour and add the pinch of salt.
-       Add the two eggs to the butter/sugar mix gradually and beat in (not too much, just till it’s all combined well).
-       If the egg/butter/sugar mix starts to look a bit curdled, just chuck in a little handful of the flour between egg additions.
-       Chuck in the flour and fold it in to the mix – keep it quick and only fold until combined – don’t overmix.
-       Split this mixture in half and colour each half with one of your rainbow colours.
-       Stick these two coloured batters into your sandwich tins and stick in the oven for about 15 minutes till they are cooked – they will be fairly thin cakes – this is a good thing – you are going to end up with six layers, after all.
-       When the cakes are cool enough, turn them out onto racks and leave to cool completely. 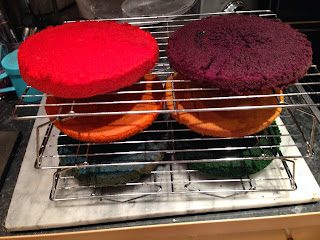 -       Frantically wash your bowls and tins and start again from * with the next two colours until you have six lovely layers.
-       When all your cakes are cooked, level them off as necessary (it matters more with more layers – you don’t want a Leaning Tower of Pisa cake for this one) and layer them up on a board with jam in between to stick them together nicely. 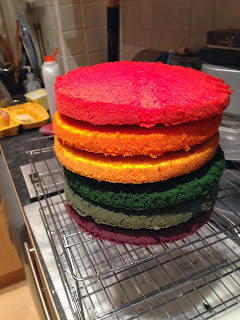 -       Refrigerate while you make the icing (for an hour at least).
-       To make the icing, stick the butter (at room temperature) and icing sugar into a bowl and beat (slowly at first – icing sugar is messy stuff) until all incorporated (it might be a bit crumby – that is fine at this stage). Again – you can do this by hand if you’re feeling strong, but icing is where those stand mixers really come into their own.
-       Add a good splodge of vanilla and possibly a splash of milk if things are looking a bit dry and beat frantically until it’s lovely and fluffy – it takes about 5 minutes in the stand mixer – probably more by hand.
-       Use up to half the icing to crumb coat your cake, making a nice smooth layer and locking all the crumbs in – it’s fine if it doesn’t look nice – it just needs to give a good base.
-       Refrigerate the whole thing overnight (or at least for a couple of hours) for the icing to set and chill.
-       The next day, spread the rest of the icing over the crumb coat – this time, make it as beautiful as you can!
-       I decorated the whole thing by spraying the icing all over with pearlescent lustre and then using stencils (cut of old bits of paper) to make clouds and spraying with blue. This is obviously optional, but I thought that since Rainbow Dash is a proper flutter pony, she’d probably quite like a sky background and it makes the cake a little bit interesting on the outside as well as being a rainbow inside. 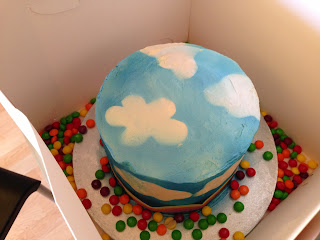 -       Finally, I stuck my Rainbow Dash figure on top (she’s just plastic – I contemplated icing her on, but thought that, if it was my birthday, I’d probably prefer something I could actually keep afterwards) and chucked a couple of packets of Skittles round the cake to reemphasise the rainbow theme.
-       Et voila – Rainbow Dash rainbow cake! Obviously these are at their best when they’re actually sliced and you get the whole rainbow effect, but I didn’t get to see that here (it always looks awesome, though). 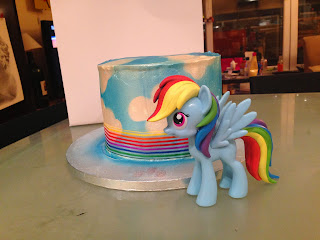 (This is a previous, not so neat, sideways, but seven layered example). 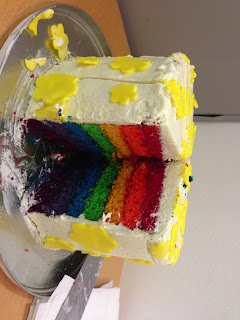 *We had a LOT of good birthday cakes - pianos, trains, swimming pools, castles - you name it. Mainly down to hard work from my mum, dad and granny, and in no small part, thanks to the magic of the (slightly odd, but also awesome) Australian Women's Weekly Birthday Cake Book.
There must be photos of loads of them - some time I'll try to find and post them.
Posted by Miss Whiplash at 18:58