I always think that "bread week" is a bit of a scam on GBBO and this season was no exception.

I mean, HOW long did they give them to knock out those ciabattas? The only recipes I've used have been ones that take literally days. Days.

I don't know what kind of trickery they use to make it work on TV, whether it's editing magic, secret advance preparation or just inedible over yeasting, but I'm not altogether sure I approve.

Interesting, Mr H's recipe, per the BBC website, which at least *looks* like the one used on the show, also purports to take at least six (likely way more) hours.

I usually use a recipe from my most utilised and bizarre bread book, The Christian Aid Book of Bread (which I thoroughly recommend, if you want a really clear easy book full of bread recipes), but instead, in the interests of Doing Things Properly, I used the one linked above for this.

Do to a slightly hectic schedule and a general lack of organisation, both proves of this loaf were a little (or a lot - these things are all relative, right?) longer than intended and the final stage stretch and fold was a little half hearted. 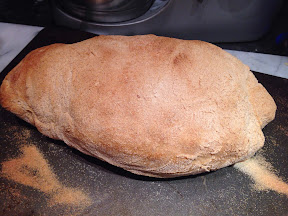 I also made it into one loaf instead of two, which meant that it was bigger and less flat than the recipe intended, but more practical from a household bread perspective. 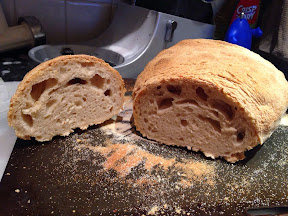 It turned out ok - I think I probably could have cooked it for a teeny tiny bit longer and better folding would have made nicer bubbles.

I'm probably not going to ditch the Christian Aid recipe in favour of this - I like it better - it's a wetter dough and gives an airier, more ciabatta-like texture, but this one was better than I expected.

I still wouldn't want to do it in an hour, though, or whatever the silly TV time is.

- Posted using BlogPress from my iPhone