After the stresses and strains of Alternative Ingredients week, Pastry week last week was a great relief.

Like bread, I think pastry has a pleasing "something from nothing" quality - to be able to create a delicious whatnot from just flour and butter is really quite magical, with the added benefit that, to me at least, pastry basically means Tarts (and who doesn't love a Tart?).

Despite the fact that the show's researchers are clearly scraping the barrel a bit to find technical challenges that the bakers (and audience) have never seen, or indeed heard of, I thought the flaounes looked quite fun, in a cheesy kind of way and although we can doubtless all agree that making puff pastry with a time limit is a *little* bit ridiculous, vol au vents are basically an awesome thing!

The frangipane (not frangipani, dudes, those are flowers) signature bake was a lovely one, though - it's one of those infallibly delicious things that you really just can't make often enough.

I thought that all the tarts on the show with pretty fruit arrangements looked beautiful as well as delicious, but for me, there was really no other choice than Bakewell Tart - the king of frangipane.

(As long as you have approximately twice as much flour as fat, you can't go wrong here. Normally, I'd use half butter, half lard - I think it makes a better pastry - but since I was planning to foist this one on a Rosh Hashanah dinner, I thought just butter might be a bit more appropriate!)

For the tart:
180g butter
180g caster sugar
3 eggs
almond essence
180g ground almonds
1 tsp baking powder
pinch of salt
raspberry jam (if I was a real bake off person, I'd probably have made it, as they seem keen on that stuff now, and if I had, it would probably have been rhubarb jam instead of raspberry, because yum, but, given that this was real life and not a bake off bubble, I just used a jar that I found in a cupboard)
flaked almonds

For the pastry - I mixed the flour and salt together and rubbed in the butter. I'm not necessarily that big on doing things by hand - I love my Kenwood - but pastry is one of those things which is quite fun to do the "proper" way, I think.
I added a little bit of cold water and mixed it in until the whole thing just came together and stuck it in the fridge for an hour or so to firm up.
When it was cool (and I had finished doing whatever it was that I was doing in the non-baking World), I took it out, rolled it as thinly as I could and used it to line my tart tin. I left some overhang round the edges. It's not the easiest thing to roll, as it's quite a "short" pastry, but as long as you don't mind doing a bit of patching if necessary, it works out ok.
I stuck in some baking parchment, filled my tart case with baking beans and blind baked at 180 for about 15-20 minutes (taking the beans/paper out for the last 5 for a bit of crispiness).
While the tart case was baking, I mixed up the frangipane.
I creamed the butter and sugar until it was white and super fluffy, then beat in the eggs and almond essence (adding a bit of almonds where necessary, to stop it curdling).
I folded in the almonds, salt and baking powder until it was all just combined.
When the tart has had cooled a teeny tiny bit (for maybe 5 minutes or so), I spread the jam into it (thickly - I think the jam is an important tart component, particularly when using unsweetened pastry like this) and dolloped the frangipane mix over it in as even a way as I could manage (this is the hardest part!) and spread it out smoothly.
I sprinkled lots of flaked almonds over the top and stuck it in the oven.
As soon as it hit the oven, I turned it down to about 160 and baked for probably 35 minutes (until it looked cooked).

I realised when I saw the beautiful pistachio frangipane created by Gin and Crumpets (she is much posher than I am...) that a "real" bakewell tart would probably have had drizzled icing over the top.
You will just have to use your imaginations to provide that. 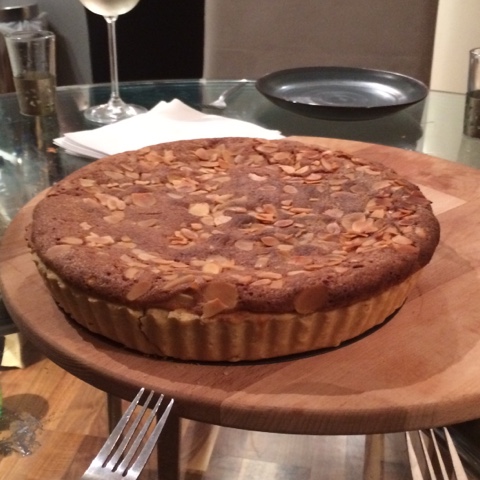 It was pretty good, even without the icing, and wasn't even too soggy bottomed (which I think is a danger with extreme jam). 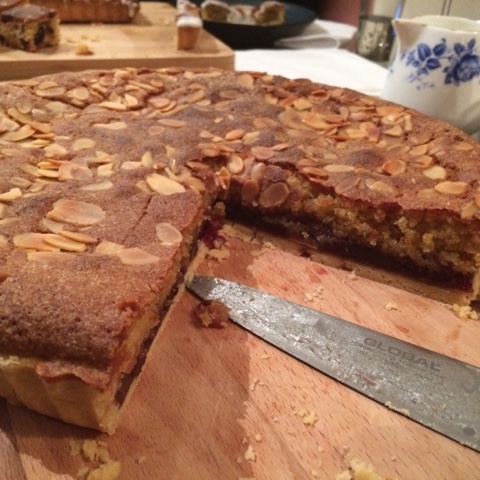 We were all obviously far too full even to contemplate pudding after the many courses of challah, salads and amazing chicken, but were able to force down a *small* assiette of desserts (the two frangipane tarts and the chocolate chip Rosh Hashanah style honey cake - photographed here with Much Cream by the v clever @Shedlikesfood). What sacrifice... 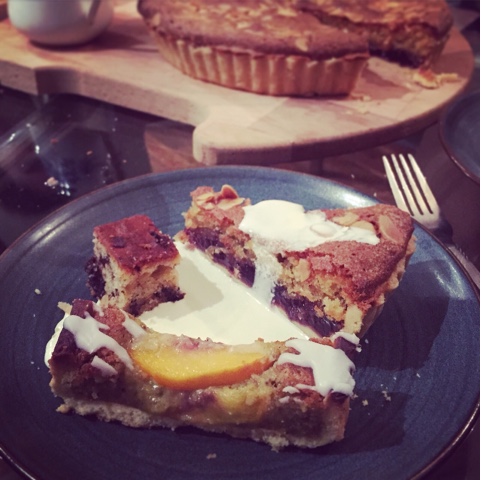 I think it's some kind of historic baking episode next time? I thought that I hadn't seen a trailer, but there are game pies in my head, which I assume means that I have subconsciously absorbed one from somewhere.
Hopefully I'm not wrong about it - pie is one of my favourite things!