Two episodes ago was apparently a first for GBBO - Victorian week - a slightly random selection, I'm sure you'll agree, but a reasonably entertaining one nonetheless.

The tennis cake was frankly bizarre. Quite apart from the fact that the length of time given to properly cook a fruit cake was completely insufficient (we usually cook our Christmas cakes for upwards of 12 hours, for example), the whole tennis thing was gloriously nuts. Why did noone ask why? It tested some fun skills, though, and I fully endorse Mat's decision to try to dry out the icing in the oven (I might have made it a bit cooler) - royal icing in the fridge will surely just go sticky?

The showstopping charlotte russe looked like a good dessert - definitely one I'll be trying at some stage (and I LOVED the fruit carving - what a delightfully odd skill to have picked up in life).

The raised game pie, though, was obviously the thing I was really interested in.
They were supposed to be made with hot water crust pastry, in the manner of a pork pie, but apparently, unlike the pork pie, the jelly is optional.
Now I have some previous with pork pies (which I thought I had probably shared with you before, though a quick squizz through my archives suggests that I may be mistaken) which have generally been successful, though my advice on the matter is to be a bit careful if you are going to make them with jelly lovingly formulated with many hours of trotter boiling, as people seem (v unreasonably, in my opinion) to be a bit unhappy if you accidentally use purple carrots and make it bright pink.
I sadly opted for no jelly, as husband is a bit funny about that stuff.

Anyway, I bought some game pie mix (and some incidental delicious quails) from the nice people The Wild Meat Company (situated in a very lovely part of the world that you must all visit as soon as you get a chance) and got on with things.

My recipe wasn't a million miles away from this *actual GBBO* recipe, though I filled it with a mixture of my game pie mix (venison, pheasant, rabbit, pigeon and boar, I believe), some sausagemeat, a bit of garlic and onion and a packet of chestnuts that I found in a cupboard (oh, and a load of herbs and pepper).
I thought there was some lard in the fridge, but it turned out to have been a trifle imaginary, so I used dripping instead.

I made it in a tin, which I thought was kind of cheating when it comes to "raised" pies, but everyone on the television did the same, so presumably it isn't too terrible a sin.

Mine was NOT beautifully decorated with dolphins or anything else - Mary would have been very disappointed with me. 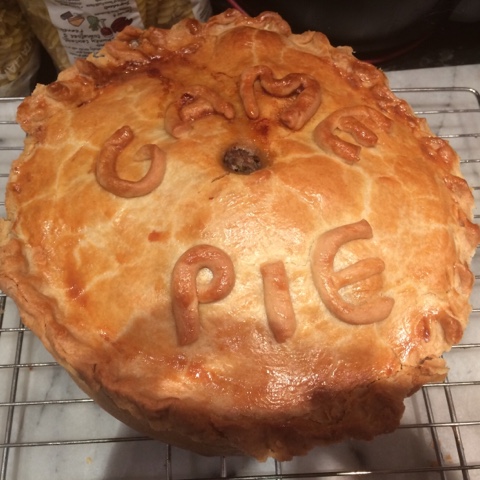 In addition, due to unforeseen time constraints, we were forced to eat it while it was still warm, so there are no lovely pictures of beautifully cut fridge slices and it was a bit, well, juicy... 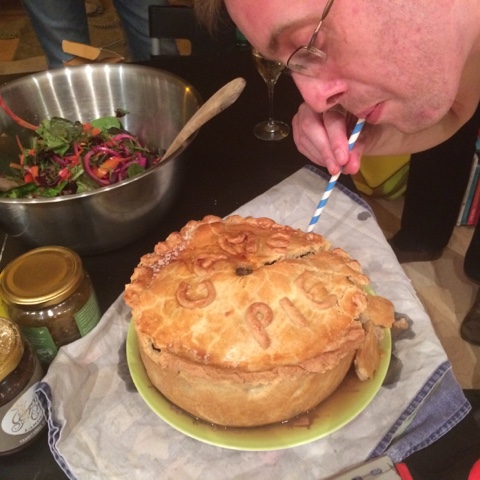 It was a good pie, though - as evidenced by the fact that, when I went to bed there was still half a pie left and when I got up in the morning, there was almost none. Big win for game! 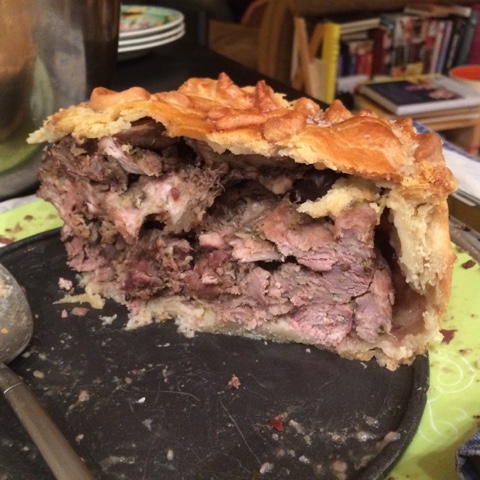 Stayed tuned for cream horns!
Posted by Miss Whiplash at 21:08