A bit of a catch up from me this time!

I have been nobly baking along to Bake Off in the background all this time, but I've not actually managed to tell anyone about it.

First up - Dessert Week! I thoroughly enjoyed the desserts, despite the splendid ridiculousness of the Spanische Windtorte technical challenge, which seemed like an awful lot of very complex stuff to make something which ultimately looks quite a lot like a pavlova (a delicious pavlova, no doubt - is there any other kind? But a pavlova nonetheless).

The cheesecakes also looked great - who doesn't love a baked cheesecake? But lest I ever forget and think that I might like to make one, please remind me that a three layered cheesecake is a foolish endeavour that will inevitably lead to tears.

Creme brulee, on the other hand, is a perfect pudding in almost every way.
It is straightforward to make, can be formulated in advance (so that there's no need to hide in the kitchen for hours while your dinner guests get drunk without you a la Come Dine With Me) and, most importantly, is delicious.

I made a pretty simple version, with blackberry and apple puree underneath my custard and an unashamedly blow torched crunchy caramel topping (grilling - honestly!!)
I had just come back from a holiday in Suffolk and had a million garden tree apples and a whole load of painstakingly picked blackberries (the nettle and bramble scars have faded now, but those blackberries have very effective defensive systems in place).

I don't usually bother with the whole bain marie thing, but I did it this time, out of a sense of GBBO duty. I think I won't bother again - the overflow custard that I just baked was just as nice, if not better.
Otherwise, they turned out pretty well - delicious and just a bit of nice bleeding between the puree and the custard (I can't imagine why this was something the judges complained about on the show - it's so PRETTY) and a delicious just-the-right-side-of-burnt scrunchy topping! 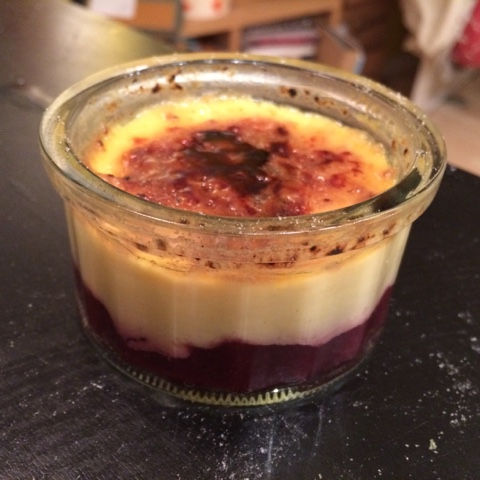 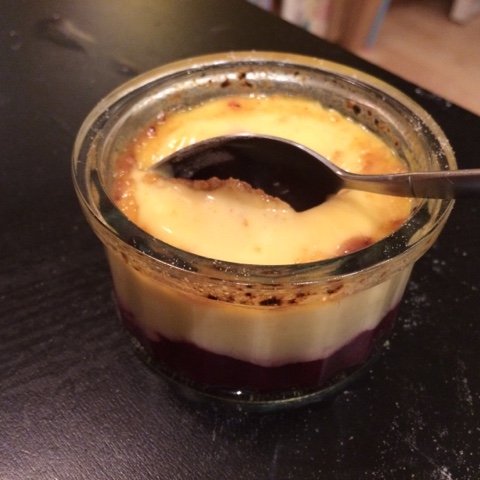 And so - onto the following week - Alternative Ingredients.

I am completely on board with feeding people things they can eat. Gluten free pitta breads (and other such things) are perfect for people with coeliac disease and allergies and dairy free ice cream is entirely approriate for vegans and the lactose intolerant (though why did nobody make sorbet? I'd have made arctic sorbet rolls - surely they would be delicious..). Ditto alternatives to the many other things that people are allergic to - it is reasonable and desirable to find good alternatives, and it provides an entertaining baking challenge.

However (and there was bound to be one coming), correct me if I'm wrong, but I have NEVER met or indeed heard of, anyone who is allergic to sugar. From a bag.
In fact, as many people will already know from my extensive ranting on Twitter/swearing at the television etc, this is a subject that is pretty close to my heart (and pancreas).

I don't think that there is one among us who would dispute that too much sugar is not a Good Thing for any of us. In fact, there are entirely valid debates to be had over what Too Much is represented by, and whether it might actually be "any at all", but that is a question for a blog that is not mainly about cake.
What is not in question, however, is that there is any difference at all, from the point of view of "health" (meaning, in this case, how it acts in and with your body) between sugar from-a-bag (as prohibited in the episode in question), sugar in honey, sugar from syrups/nectars and, indeed, sugar from fruit (or anywhere else). Substituting one of these things into your cake may make it taste better (and will almost certainly make it different), but will not make it any more or less acceptable from a physiological point of view to anyone - there is nobody for whom this cake will be a more "better" thing, unless they happen simply to like the taste (or have some kind of ethical reason for not eating sugar-from-a-bag, perhaps). It is a pointless (if not actually fruitless...) exercise. This was the crux of the first element of my TV-ranting.

The second is a little more specific to my own situation. If it were possible to make an actual (palatable) cake with no sugar at all, it would STILL be a futile exercise from my own point of view as someone with T1 diabetes (which seems to be a fairly frequently cited "reason" for making things - the same also applies to T2 and other types - it's not all about me). This could be done fairly easily if desired, by using one of the genuinely sugar free sugar substitutes (aspartame/xylitol etc), and I was a bit surprised that none of the GBBO people mentioned or tried it. Anyway, the point is that this cake would still be chock full of other carbohydrates (most commonly flour) which would, on eating, be turned to glucose extremely swiftly in the body, which would raise blood sugar levels almost as much as if it had been full of sugar in the first place. Unless you go the whole "low carb" hog (hogs, of course, being about as low carb as they come), the diabetes argument simply doesn't hold water - it might be a little less extreme, but eating (sugar free) bread will spike blood glucose levels in exactly the same way as eating cake. The spikes may be less extreme, but, fundementally, the effect is the same. This forms the basis of rant element number two.

As well as it being a bit annoying, the propagation of misinformation about "sugar free" stuff can be actively quite dangerous. Most (though not all) people with T1 diabetes are aware of how food (specifically carbohydrate in food) affects their blood glucose levels, but many many people with T2 and other types are still not given such good information and are not provided with the means to test the effect on their blood and make their own, informed, decisions - there is a very real danger (and, as someone who hangs out on quite a lot of diabetes forums and things, I can see this happening right now to real people in real life) that people are damaging their health because the media and public understanding of what "sugar free" means is not in line with what it *actually* means.

This obviously extends to people without diabetes too - the effect is similar - it's just that their bodies are equipped to deal with the rises in blood glucose which makes them less immediately damaging, but still likely to contribute to insulin resistance in some people in the long term.

All this aside, I still made a cake with no sugar-from-a-bag in it, and it was very lovely (though didn't *work* as well as a normal cake - that sugar is clever stuff, innit) - husband was pleasingly utterly delighted with it. The orange blossom water gives is a slightly aromatic (non honey aromatic - it obviously already has the aroma of honey) frisson - it actually tastes quite a lot like those delicious honey balls that we used to get from the Greek bakery when we were little.
It is absolutely dripping with honey and will raise your blood glucose levels no end!

I creamed the butter and honey together, like a "real" cake and beat in  the eggs and orange blossom water a bit at a time (adding some of the flour where necessary to stop it curdling) and then folded in the flour and yogurt.
I baked it at about 160 (fan) for probably 25 minutes or so.
While it was baking, I melted a big load of extra honey and a little bit of extra orange blossom water in a wee saucepan.
When the cake was coolish, I poured the warm honey over the top. 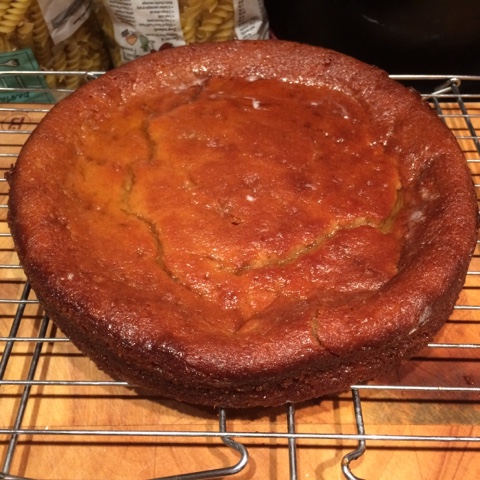 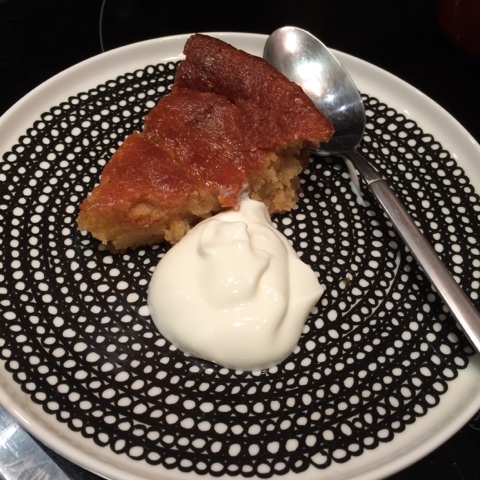 Thus concludes the catch up. Apologies for incoherent ranting.

Normal service should resume next time with frangipane (bakewell tart FTW), which I am much looking forward to!