What We Ate For Our Dinner With Heston

In case you have been recently and tragically marooned on another planet and don't know, Mr H Blumenthal yesterday opened a new London restaurant at the Mandarin Oriental on Knightsbridge.

I'm sure you all know the premise - historic type food with a modern twist etc. It's not really going to be Heston's either - it will be run by Ashley Palmer-Watts but Heston is due to be there for the first few months too (and indeed, was there today, alternately cooking and schmoozing the Important People).

When I heard that they were taking online bookings, I (and many others) frantically logged in to Open Table without any great hopes (I'd heard all about the Fat Duck booking process) and unexpectedly scored us a table for two for lunch on a (not super convenient) date selected by the random number generator that is my mind...

I spent a month grovelling, pleading and sneaking in order to obtain the day off work (month-end, don't you know?) and trying to work out (again) exactly what 'smart-casual' really does mean (my interpretation is clothes with as few holes in as possible and preferably without toothpaste spilled down the front) until today, when my randomly selected date finally rolled around.

So - to the important bits!

We had cocktails in the bar while we were waiting for our table (we were early):

Sake martini for my lovely husband (as yet unnamed on this blog - we're working on it...)

and some kind of sloe ginny, fruity type thing for me.

We had been toying with the idea of the (apparently v good value) set lunch menu, but were seduced by the a la carte (I'm SO easily led).

We had some lovely breads while we were deciding.

For starters, He-Who-Has-Not-Yet-Been-Named went for (or stole from under my nose, depending on how you view it) the obvious Meat Fruit (chicken liver parfait cunningly disguised as a mandarin orange) with smokey toast

and I had bone marrow with pickled vegetables, which was pleasingly like eating a Natural History Museum dinosaur leg - I think it's to do with the fact that the bones are so clean. Or something.


Our main courses - as is often the case, the least exciting looking bit of the menu - were steak and chips for Him, with (utterly delicious) mushroom ketchup and a red wine sauce and, for me, turbot with so-called cockle ketchup and spinach.
Maybe not quite as wild as the meatfruit, but we totally enjoyed both. 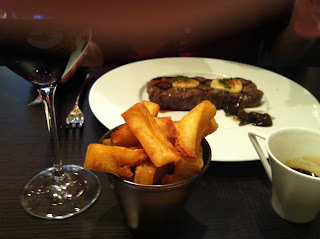 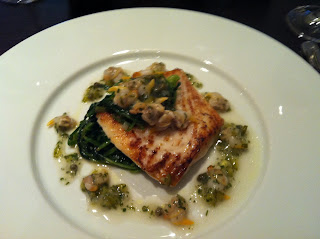 And finally - pudding. We were a bit groany and full by this stage (three courses for LUNCH!) but we soldiered on with the Tipsy Cake and spit roasted pineapple (which we'd been watching turning by amazing clockwork all through the meal).
Totally my highlight - it was delicious. I'm definitely going to be trying to recreate it myself as soon as we've had a bit of digestion time.
We *accidentally* started eating it before I remembered to photograph it - surely a testament to the temptation :-) 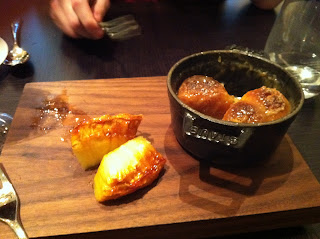 And a weird little complimentary post-pudding pudding.
Something that tasted (in a good way) like Earl Grey flavoured condensed milk, with a yummy thymey (I think) and slightly savoury shortbread. 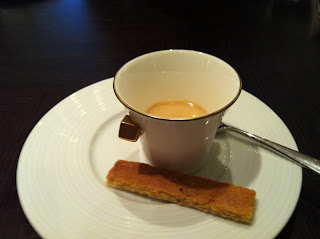 There was also a pretty good selection of wines by the glass, which we fairly generously availed ourselves of and I particularly liked the fact that the menu (which I stole) had approximate dates for the origins of the food and often references for the recipes.

Overall, we had a great lunch. We can't afford to go back very often (and probably won't be lucky enough to get a table so easily next time), but it's definitely one for the Special Occasions List.
Posted by Miss Whiplash at 19:58

Email ThisBlogThis!Share to TwitterShare to FacebookShare to Pinterest
Labels: Dinner by Heston