I realise that I'm a bit late to the party here, but it has recently come to my attention that you can make macarons using Italian meringue, rather than the, in my experience, a whole lot less stable, French method - genius!

So yesterday, I decided to see whether I could do it and, as it turns out, it's really pretty easy :-)

Some day, I'll be organised enough to be one of those awesome people that takes step by step photos.
This is not that day.

I did a wee bit of web-based research and then dived in.
I knocked up a quick Italian meringue (I whisked 75g egg whites and slowly dripped/slow whisked in a sugar syrup of 200g sugar and 50 g water, brought to a temperature of 245 on the hob, followed by a five minute fast whisk till cool and glossy).
I folded this into a (pretty stiff) mixture of 200g icing sugar, 200g ground almonds, 75g egg whites and some pink food colouring (obviously) until just mixed.
I piped circles onto a silicone baking sheet (actually rather better than I'd been expecting to - I thought I'd end up with loads of differently sized uneven circles, but it turns out that I'm better at piping than I thought...), left to dry for half an hour or so, and baked at 160ish for 10-15 mins.
Later on, I sandwiched them round some rather extreme white chocolate ganache.

I was really pleased with how these turned out, as a first attempt, at least - particularly the mini ones (see afternoon snack post for scale) 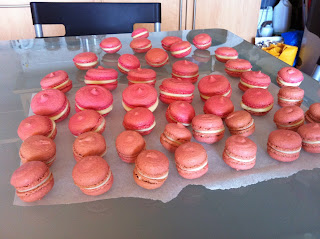 Next time, I'll play with flavours and things.
I'm pretty sure you can do something nice with lemon and if anyone knows where to get freeze dried raspberries, I'm definitely looking to incorporate them...
I can see myself getting a bit obsessive about these, so if anyone is prepared to eat some, I'm welcoming volunteers.