There's no such thing as a free lunch, right?
Well, a month or three ago, I bought a little selection of wines from the nice people at Gauthier, which were pretty well selected, not badly priced AND had the added bonus of including a voucher for a free lunch at Gauthier Soho, which we finally managed to cash in a couple of Fridays ago.
So this is how it went.
Some wee snackages to start - lovely focaccia, fishy roll and goats cheese.
And, out of shot, a selection of olive oils.
They also brought us a choice of lots of awesome bread roll, which were unphotographed, but really very good. 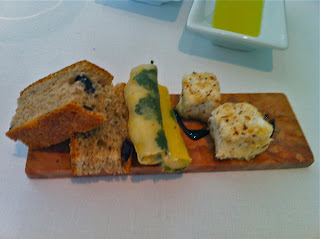 We also ate these pretty coloured whipped butters. They were beetroot, unsalted and an amazing seaweedy one which I honestly could have eaten whole. Probably twice. 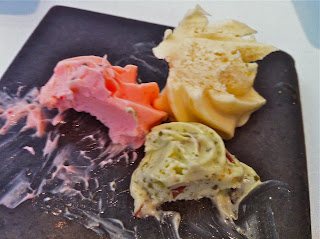 All this was followed by a wee fishy pre starter. Marinated prawns and (we think) a lobster foam and things.
Some people don't like foams and whatnot. I sympathise. However, the stuff on here was really tasty. Husband in particular was a big fan.
Maybe they're now passé enough to be retro and cool again...?
They were also served with the most awesome mini fork.
I love cutlery. 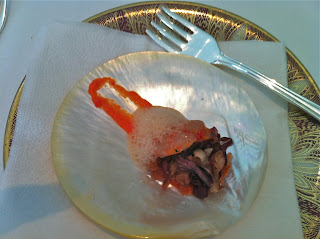 Husband started with a pea veloute - looked a bit dull to me, but he assures me that it was his dish of the day (if not the year). 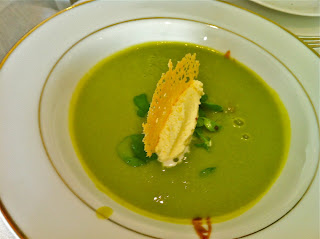 I had marinated mackerel and citrus salad - it was properly delicious - I love mackerel generally and this one and the salad were really orangey and nice. 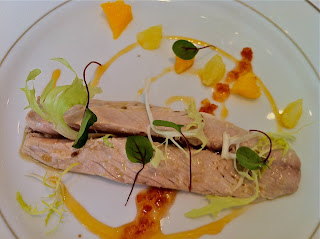 I had roasted skate wing next with various fennelly things.
People who know me will be surprised about this. Really, I quite surprised myself. I do NOT like anisey stuff. No I do not.
It was worth it, though, for the skate. I'm a little bit scared of cooking skate wings myself, even though they always look tempting in the fishmonger.
This one was lovely - no bones at all, and such a good meaty flavour - the lemon and caper sauce was right up my street too. 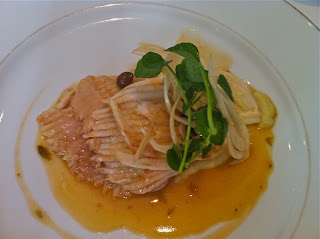 Husband had this duckstravaganza - honey glazed with a spicy duck jus. Also good, but he was still reminiscing about the pea veloute. 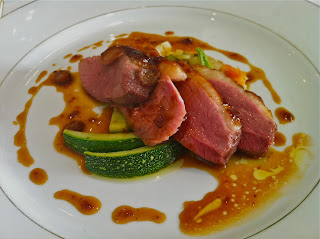 Another bonus course next - this pre dessert strawberry soup. With a meringue stick. Another cracker of a dish. 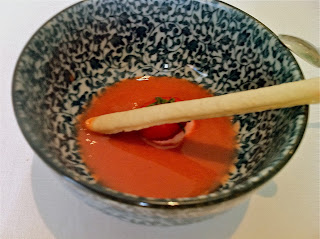 And we both chose the same pudding. Husband was sure that he didn't want pudding, but he did manage to polish it all off anyway.
A selection of ice creams and sorbets (and a slightly random chocolate mousse and a wee jelly whatsit) served on a "frozen Himalayan salt stone).
The ice creams and things were really delicious (I'm quite into ice creams as a restaurant dessert at the moment - they're such a nice refreshing way to end a meal) and the stone was actually salty, which was slightly bats, but really quite nice. 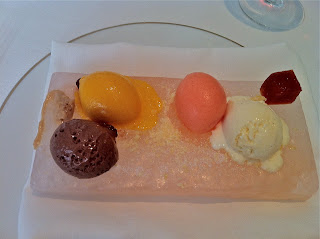 We upgraded our free set lunch to a set lunch with half a bottle of wine each for an extra £8 a head.
They let us have our half bottles as white with the starters and red with the mains.
There was also lots of lovely free sparkling tap water.
The place is rather nice - we sat upstairs on, I think, the first floor - it was really quite like being in somebody's house. And it was all lovely linen tablecloths and things. Very classic and French.
At first I found the service a wee bit overbearing - I'm pretty sure there were more serving staff than there were customers. They were all very nice, but there was definitely a stage where I felt like every time I went to hitch up my skirt and shoot up with insulin (not a clever clothing choice - I'm a dumbass) there was someone bringing more butter/refilling my water glass/standing over me.
Once I got used to it, it was ok, though - I'm clearly not accustomed to being waited on.
The sommelier was very helpful also - and I never felt like anyone was judging us for the fact that we were clearly on the cheap set menu (which, though you shouldn't, you do occasionally find).
All in all, I would definitely recommend the set lunch here (the a la carte also looked good - and the pricing structure was nice and straightforward) - for £25, I would say that the value was really very good and, given that ours was free, even more so.
And husband assures me that you must have the pea veloute. Apparently I've not bigged it up enough.
It was a really lovely way to spend a Friday lunchtime.
*A footnote... I remember that Gauthier made a lot of headlines at the time for putting calorie counts on their menus. I'm happy to say that this didn't worry me at all - all I gained from it was the fact that, from a calorie perspective, it didn't really matter what I chose. Husband, on the other hand, had a quite different experience - he was genuinely quite wracked with guilt about it. It properly influenced his choice and everything. Interesting.*